The children were playing while Holston climbed to his death; he could hear them squealing as only happy children do.
–Hugh Howey - Wool - c.

For generations people have lived in the silo, the only look at the outside they get is on the screens. But the cameras are outsides, and over time they get dirty, the screens are obscured and blurry. But to go outside is to die. Those who are condemned to death, whether because of something they said or did, must clean the four cameras before they succumb to the poisonous and corrosive fumes. 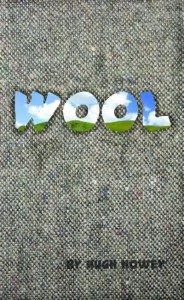 I first came across Wool on Metafilter[1] and I am so glad that I bought it. It is a dytopian short story, which has “changed the course of self-published ebooks” or so the interwebs tell me.

Through flashbacks we are told about Holston’s life. How he and his wife won the lottery one year, but never got around to having their child. His wife, an IT specialist, was researching how to retrieve deleted data and stumbled across something.

As it is a short story so you can easily read it in one sitting, I read it over mu lunch break, and I think it works well if you read it like that, without too much speculation as to what his wife discovered, and then, once you find out, whether or not she was right.

I really liked this book, it is smart and engaging, and now I’m off to shell out for the other 4 stories in the series.

RT @rabiasquared Shameful. No surprise. The system does not hold itself accountable. That's why it must be reimagined. This is why we need District and States Attorneys who aren't aligned with law enforcement, who come from civil rights and criminal defense backgrounds, not career prosecutors. twitter.com/AP/status/1308…

RT @cfmmuk On breaking news stories, it is wrong for newspapers to headline stories on unverified news. Again & again, they are proven incorrect. Here the claim a man shouted Allahu Akbar as part of a bomb threat at the Eiffel Tower is called "fake news" by police & Tower spokespeople pic.twitter.com/GgiALVMzex

RT @OisinCoghlan I've just asked my TDs to do all they can to ensure a new climate law is passed by Christmas. Join me in taking action. stopclimatechaos.ie/takeactio…