As I mentioned in my review of Wool, the first in this series, I came across this author through a post on metafilter. He has self-published this series of books, and some others, through amazon, mainly on the kindle, and become something of a hit. I bought the first to see because of that metafilter post, and bought the rest because I really enjoyed the first.

The setting is The Silo, and each book, or episode, reveals more and more about the world this silo resides in. And why. 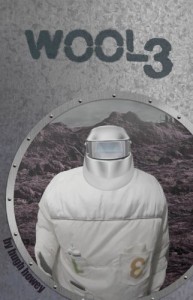 I found the first book bleak and haunting, but very engaging at the same time. The first two are also the saddest, I found, although overall they are quite bleak books. But I guess post-apocalyptic dystopian fiction should be, right?

The different episodes are told through differing point of views, and each figures out a little something more. Sometimes based on the earlier books and characters’ investigations or thoughts, and sometimes off their own bat. If you are a sci-fi fan you really should give them a go.

The books are full of secrecy and unknowns. Why does everyone live in the silo? What happened to lead to the earlier uprisings? How much have the people lost? Why are they all stratified and separated out? As the episodes progress the individual stories add to the overall picture and you learn more and more, just as the characters themselves do, in a very entertaining fashion.

It also raises some interesting questions. Do the needs of the many outweigh the rights of the few? Is obedience and a willingness to follow orders a good thing? Does the risk of total destruction excuse the murder of the few? In some ways it made me think back to Obedience to authority because by staying obedient and doing what you were told the system in the silo would function and the majority of people would continue to survive. But if you started to question those orders you could bring about so much death, without even knowing it.

Book five is the latest in the series, but there may be more. And in his most recent post Howey has said that the series may be adapted into a tv show.