Obedience is as basic an element in the structure of social life as one can point to.
–Stanley Milgram - Obedience to authority - c.1974, 2009

In the 1960s Stanley Milgram and his associates carried out a number of experiments on obedience. They were set-up a situation where people thought they were helping in a memory/learning experiment, and how it related to punishment. So they subjects were asked to administer electric shocks to learners every time they got their word pairs wrong. What they didn’t know was that it wasn’t the learners being studied, but the shockers, and the experiment was to see if people would continue to obey and shock the learners even over their protests. Many people were surprised by the results. In a majority of cases subjects continued to shock the learners even after they protested. 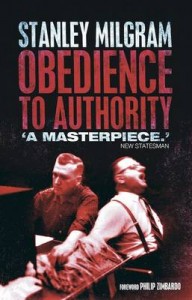 This was a fascinating read. Controversial when first published, but familiar to many people know. It really does show how easy it is for people to stand by and let “evil” happen.

Reading the book however, I was struck by just how dated the language was. The researchers themselves came across as so dismissive and condescending towards their subjects. Not through malice, but merely because they weren’t scientists. They were ordinary people.

And it is very very typical of what we today might think of as a typical 1950s society. People seemed to be aware of their “betters”, and at one point Milgram wants to show how ingrained deference and politeness is, and so he asks readers to imagine someone they have a lot of respect for. Preferably someone of an older generation, and someone they address by title. Straight away I was left wondering who on earth I address by their title. I don’t think I use titles at all. My boss at work is called by her first name. I don’t talk to priests, and I don’t know any gardaí that I might address in that fashion. But it was a different time back then.

Society has also changed of course. And we are more cynical and less trusting. This is something that some people point out to as flaws in modern culture. But I think that cynicism and wariness can be very valuable. I’d love to see results from a similar study done now. Would people still be as likely to follow orders? Given all that we know?

The Milgram experiment on Wikipedia

If you’ve reviewed this book why not fill in your details in the Mister Linky below.