I haven’t read any of the book in the Millenium series, nor have I seen the Swedish version of this film. So I can’t comment on how well or not this adapts the source material. I will say that it is a good film. It isn’t a film that I would say that I particularly enjoyed though, the story isn’t one that lends itself to enjoyment.

I’m not going to say all that much about the plot. If you’ve read the books you all ready know what the story is about. And if you haven’t, well, it is better to now know. 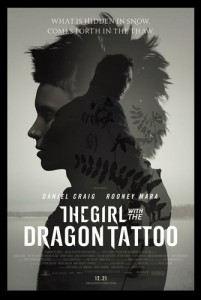 The girl with thedragon tattoo

But, basically it is a cold case. A journalist is hired to investigate the disappearance of a sixteen year old girl many years before. The suspects are all members of the same dysfunctional family. And along the way we meet Lisbeth Salander, an investigator in her own right, although she specialises more in computer hacking and, well, more illegal methods.

It is a long film, but it didn’t feel that long. The opening credits grabbed my attention and the film had it from then on. Okay, I sorta had an idea who the murderer might be, simply because of casting and big names, but I wasn’t sure, so I won’t complain too much about that.

A big deal has been made out of the rape, or rapes, in this film. They were what I had heard about before I went, and the fact that the darkness of the film was putting some people off the film. Despite the fact that they had read the books and the same thing happens there. I always find things a lot more real when I read them rather than than watch, but I can understand some people have reservations. After all, you can always skim ahead in a book, in a film all you can do is sit through a scene. And you never know how it is going to be filmed and portrayed. Here it is graphic and very uncomfortable to watch.

And it is rated 18s here in Ireland, so it is something to bear in mind about this film.

The other aspect that everyone is talking about in regard to this film is Lisbeth Salander, and how she would be portrayed on screen. Now, as I said, I had no image of Lisbeth in my mind before hand, so to me Rooney Mara did a great job. I thought she was great as the “troubled” Lisbeth, with her lack of social niceties and propensity for violence and revenge. When she was on screen it was hard to focus on anyone else. Craig was adequate. Or maybe that was the character. He was a bit of a non character for me.

So, will I be watching the sequels if/when they come out. I think so, and I may even investigate the book now that I’ve seen the film.

Tags: based on bookcrimehackersjournalismMillennium seriesmurderR-18srapeThe girl with the dragon tattoo