There was a thin child, who was three years old when the world war began. She could remember, though barely, the time before wartime when as her mother frequently told her, there was honey and cream and eggs in plenty.
–A.S. Byatt - Ragnarok : the end of the gods - c.2011 - pg.3

There was once a girl, an evacuee during the blitz, who read a lot. Myths, legends, religious books. And her favourite was the Norse tales. She read and reread them; they spoke to something in her.

Because, lets face it, Norse mythology is awesome! Not that I’d want to know Odin, Thor, Loki or the like, not in real life, but as stories and tales they are great. Larger than life, so unpleasant in so many ways, and yet attractive and appealing as well. 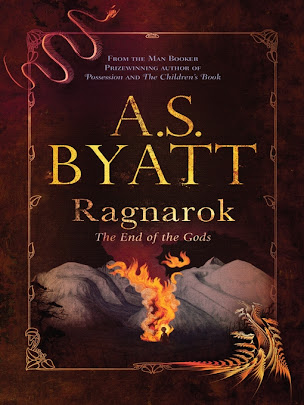 Byatt’s “thin girl” is, of course, a version of herself and her own experience of encountering the myths

She is our guide to the myths, and so in some ways the language used is slightly simplistic and childlike. But at the same time it is beautiful and complex and mythic. I really enjoyed this. I love myths, ever since I was a child. More often than not the myths I read as a child were usually Irish myth and legend, but there was always the occasional Greek or Roman myth. But Norse mythology I’m not as familiar with. I know the basics, and I definitely picked up a bit from reading the likes of Neil Gaiman’s American Gods, but most of those have been retellings and adaptations. This is more traditional myth. It doesn’t attempt to explain or humanise the gods, they are inexplicable.

From the little I knew of the myths I always sorta liked Loki, and that feeling increased as I read this. As Byatt says, he is neither good nor evil, he simply wants to know how things work, and to create chaos. As for his three children that destroy the world… well, you can’t blame them for wanting some form of revenge on the gods. After all they were the first sinned against. Although maybe killing the gods and destroying the world was going a tad too far.