Cassy lives with her grandmother. Her practical, sensible, responsible grandmother. Her mother is a dreamer, unable to look after herself let alone her daughter. And her father, well, no one ever talks about him. Cassy has learned that if she isn’t told about something then she shouldn’t ask, it obviously isn’t her business. But every now and then Nan will decide, suddenly and without warning, that she should go visit her mother. Stay with her for a few days, or maybe a few weeks, until she is sent for. It’ll give Cassy a chance to get to know her mother, so her grandmother says. 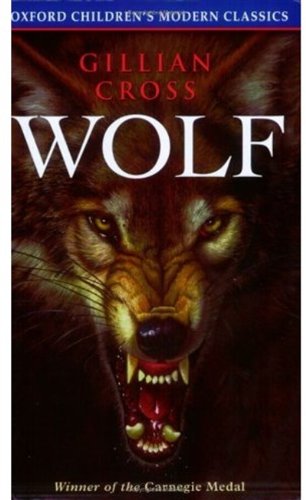 But on this occasion is all came far too suddenly for Cassy’s liking. And when she tries to get in contact with Nan there is no response. Her mother has moved from her address but Cassy is used to this, and tracks her down to her new squat and her new boyfriend. He is a children’s entertainer. But something about him makes Cassy uneasy. And then there are her dreams, wolfish and full of danger…

I’m not quite sure what I was expecting with this book, but I got something quite different, but nevertheless a very entertaining and readable book. I really liked Cassy as a character. Her upbringing with Nan has made her such a no-nonsense girl, she is only thirteen but she is a lot more sensible than her mother. A lot more mature and in touch with the “real” grown up world. Or so Cassy believes. And in many ways she is the grown-up child, knowing that work has to be done and that fun is for afterwards. Her mother is far different, but she is also hiding a secret. The same secret that Nan keeps from her. Over the course of this book, and it is quite a short book so I won’t be giving away much more, she has to discover that truth, and come to the realisation that sensible, responsible Nan isn’t always who she tries to be. That the past sometimes needs to be investigated, even if those you love and trust think it is none of your concern.

Other reviews: Things mean a lot ; Words by Annie