I picked this book up on impulse. I had finished a book the day before and hadn’t yet decided what to read when lunchtime came around. I scanned the library shelves and this was the only one that seemed to appeal, mainly I think, because of the cover. It’s pretty awesome looking.

I had seen mention of the book in a few places, but hadn’t ever read a review, so didn’t have a clue what it was about. I figured Joan of Arc would figure somehow in it, you don’t call a book The book of Joan without intending that reference. Could you?

So I started reading it. 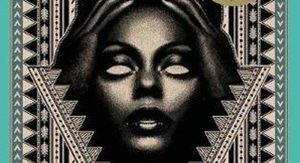 It is certainly a book that throws you in at the deep end. Which usually I like, world-building through storytelling rather than through exposition dumps. But it is also very bleak. Again, this is something that can make a story work. Kameron Hurley’s work is the first thing that popped into my head as a comparison. Her stuff is often bleak. But somehow here it just seemed more hopeless and doomed.

Maybe it is just where my own head is at at the moment. I recently watched Tomi Reichental: Condemned to remember. A documentary I would urge you to watch, but the subject matter is a difficult one. He survived the concentration camps as a boy, and in this film he travels through Europe and sees how Nazism and racism are still destroying lives. How the world seems content to ignore that tragedy that is Syria and the refugee crisis.
And then I watched The big short about how billionaires gambled and won, leaving ordinary people bankrupt and in poverty.

So I’m sorta feeling the bleakness of the world at the moment, and wondering what exactly we can do to help. Is there anything?

So maybe reading a bleak1 novel all about the terrible things people do and death and destruction and more death wasn’t really the smartest idea. Maybe if I reread this in a month or a week it would make a different impression on me.

But it just felt depressing.

Which isn’t to say it isn’t well written, because it is. I finished it after all, despite the darkness and the desolation2 I even liked parts of it. It just isn’t a book I could ever say that I enjoyed, never mind loved. Maybe you’re different and got something else out of it?