Part of my Once Upon a Time reading.

George is an American ex-pat living in England. He has been there for so long that, and is so unlike the stereotypical “loud American” that most people require convincing of that fact. He lives a quiet, almost content life, but a somewhat lonely one. He gets on well with women, but the relationships never last. He is described as being too kind, too giving, but not all there. And so they leave him.

One night he wakes in the middle of the night, a strange sound, a keening, brings him to the back garden and a big white bird that has been shot by an arrow. The next day he meets Kumiko. 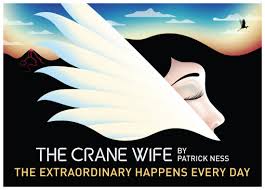 This book is loosely based on a Japanese folktale. In that story a fisherman rescues a crane who becomes a woman, and his wife. She brings him great wealth until his greed becomes overwhelming and he forces her to create too much. And so she leaves him.

I loved a lot of this book. Some of the quotes and ideas in it are fantastic. I always enjoy reading stories about stories, and that is a point that is brought up more than once in this book. That a story changes depending on point of view is not an original thought, but I thought it was handled well here. And the idea that no story ever ends, well, that’s true as fanfiction can attest to :)

The book may be called The Crane Wife but it isn’t about Kumiko, it is about George, and to a lesser extent his daughter Amanda. Kumiko isn’t that much of a character in the story, instead she is a catalyst and a turning point. She effects the world around her but she herself remains unchanged, unchanging, and unknowable.

I have read other reviews that say George is too much of a “nice guy” stereotype. One of those who because they do the right thing think themselves entitled to get the girl. I’d have to disagree with that reading of the story. Yes, George starts out as a nice guy, but maybe that’s because he hasn’t been challenged enough in life. He gets by with minimal fuss, and minimal drama. He gives himself in relationships but the women in his life complain that he isn’t really all there. That, to me, indicates a lack of passion. And that is what Kumiko brings to him. A passion that takes over and catches him by surprise.

And he really isn’t such a “good guy” Show Spoiler ▼

he does cheat on Kumiko after all

but he does try his best, even when he is pushing for knowlesge that he knows he shouldn’t be demanding. He is flawed, but it is a flaw that only becomes visible when he is put under strain.

The first half of this book I loved. It tailed off a little in the second half, but I still think that Ness is such a great writer. This isn’t one I can say that I totally and utterly loved but I still enjoyed it and would recommend it.

Other reviews : Medieval Bookworm ; The book smugglers ; The speculative Scotsman ; Of books and reading