In the near future the economy has collapsed. Money is pretty much useless. Matt and his family have been lucky, they can grow some food and have been sensible, trading and bartering for what they need. But now the raids have started. Those with nothing are coming after those with something, no matter how small that “something” is. The only option for Matt and his family is to flee the UK. But their destination, France, may not be welcoming English refugees for much longer. 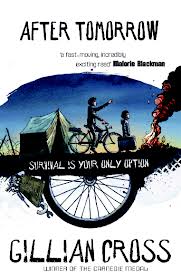 I’ve listed this as economic fiction, not a great made-up-genre, but if science fiction is fiction partly based on scientific developments, and fantasy fiction has fantasy then it just makes sense to call a book about what happens when the economy implodes economic fiction. Because After Tomorrow isn’t set in the distant future just an alternate today, one where England is a place to flee from rather than too.

I’ve only read one other book by Cross, and judging by that and this one I’d have to say that she is an author I’d recommend. Cross takes a topical issue like immigration and refugees and gives it a little twist that probably makes it a lot easier for British children to relate to. It puts the question directly to them, what would happen to you in this situation, how would you react?

After tomorrow is a a good solid read, with plenty of action to keep your interest. Some of the story is a little easy to see coming, but that doesn’t detract at all. After all, why would Matt see those possibilities, he is just a child forced into trying to survive. Well worth a read.

Read a sample on The Guardian

Other reviews : Bookwitch ; The bookbag