Read/Download for free from The University of Adelaide

After his death the nephew of a Mr. Edward Prendick found a strange account among his papers. It was known that Prendick had been cast adrift after the ship he was on sank. The tale he told his rescuers a year or so later made very little sense, and so he pretended memory loss, for fear of being thought insane. For he ended up upon the Island of Doctor Moreau (title alert) where strange creatures lived, the results of Moreau’s experiments and vivisections. 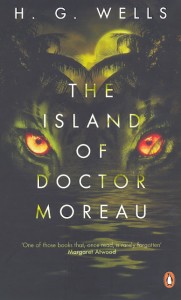 This is another of those books that has entered into popular culture and imagination. We all know the general outline of the story. An insane scientist creates strange beast-men on an isolated island, with terrible consequences.

Even if you think you know the story, if you haven’t read the book you should give it a go, because it is one of those classics that have gone on to inspire so many other sci-fi & fantasy stories. Not to mention episodes of The Simpsons.

The story is told in first person by Prendick some time after his escape from the island, so he knows how it ends, and sometimes will use that fact in his telling. Foreshadowing the disaster we know is coming. And then there is the character of the Doctor himself. A horrible individual, I don’t think there can be any real argument there, possibly one of the first “mad scientists” so beloved of horror & sci-fi? He shares with Frankenstien a desire for knowledge. And there are plenty of echoes of other stories as well in that regard, but he is the first one that I’ve come across who really doesn’t care about anything but his work.

Okay, Frankenstein was selfish and unthinking, but at least at some point he actually considered that maybe what he was doing wasn’t such a good idea. He was the hero, in a way, his arc was all about realising that you cannot have mastery over nature. Moreau never learns that, unless you count death as knowledge. Unlike Frankenstein Moreau is the bad guy here. He wants to remove the “beast” from the animals and turn them human. That is something that cannot be done, because humans, of course, are part of the natural world.

And his lack of empathy for any pain the animals suffered is truly appalling. Not that Prendick is much better. He can’t stand it while he can hear the animals moaning in torture, but once out of earshot he isn’t too bothered by it. Vivisection for vivisection’s sake is not a good thing.