Her mother had been a metal worker, a follower of the Mistress of the Forge.
–Eleanor Arnason - A woman of the Iron People - c.1991

Lixia has just landed on an alien planet. Humanity have come exploring the stars, with high-minded ideals, and rules about what action should be taken depending on how advanced the peoples they meet are.

Nia has grown up among the Iron People. Her mother died when she was young so she went to live with one of her mother’s sisters. She has always felt a little different from the other women of her village.

And I really don’t want to say much more about the plot. Suffice to say it is a first contact story. 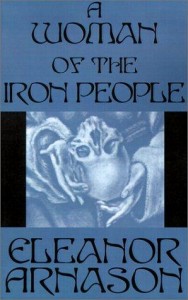 A woman of the Iron People

The reason I picked it up, in fact the reason that I heard about this book at all is because I came across a post on Tor.com by Jo Walton which called it a masterpiece. And because of the wonders of modern technology was able to go online and buy it straight away. I love living in the future :)

But this book is set even further in the future, a strange sort of Socialist, Zen future, where clearly the earth has gone through some bad times, but come out doing okay. More than okay if they are travelling to the other planets. Still, they have been travelling for a long time, and maybe home isn’t what they thought it would be.

But the main thrust of the novel deals with the “natives”, Nia in particular, but there are some other great characters on the planet. And some really interesting ideas. Nia comes from a people where the women stay in the village, but once the men go through “the change” they leave. They can’t cope with being around people, and so live alone. Every spring the women go out from their villages to find the men and mate, they then return and raise the children. Nia isn’t entirely happy with this set up, and over the course of the book we meet with a few others who don’t quite fit in either, leading to speculation as to whether it is custom that dictates or biology. Ahhh, nature vs nurture debates :)

I really loved a lot of this book, unfortunately it did drag a little towards the end but not enough to put me off really enjoying it.