Just as with Dracula most of us are familiar with the story of Frankenstein and his creation, even if popular culture often refers to the monster by that name. It probably suffers a little because so many of us think we know the story, why should we read something that we already know about. But it is worth a read.

Framed by the letters of an Arctic explorer to his sister, the main body of the novel is made up of Frankenstein relating his past to Capt. Walton. Frankenstein urges Walton to listen to him, and to learn from his mistakes, to not let his passion take over his life. It may be the end of him, as Frankenstein’s has destroyed his. He tells of his childhood in Geneva, of growing up a happy child, of heading off to college in Germany where his ambition first surfaces. He believes he knows how to create life. And so, of course, he sets his mind to doing just that, only for this passion and enthusiasm to ruin his life. 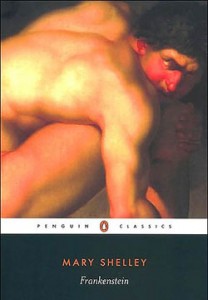 I had read Frankenstein as a teenager, but I’ll admit to remembering very little of it, and reading it this time around I just couldn’t get over how selfish the good doctor is.

I know, it is a first person story, so obviously we are going to get his point of view, his thoughts and emotions. But he never even tries to put anyone else first. At more than one point in the story he mentions that another character is sad, or tormented, but each time he follows up by saying that if only this character knew how bad he himself were feeling they would be put to shame. No one could possibly *feel* as much as Frankenstein.

And never once does he take responsibility for his own actions. He created the “monster” and promptly abandons him, yet, while he acknowledges guilt (although that may just be him putting himself at the centre of the entire world) he later says that he is blameless. Blameless!

Despite Frankenstein’s flaws this is a great read. Or possibly because of his annoyances, they certainly make him more of a character, its just a pity that there is no one else in the novel to balance him out. Yes, the monster gets to tell his tale, and you can’t help but pity him, despite his actions, but he isn’t enough to truly balance out Viktor’s influence.