I read this for the Coursera online course, I’ll post the short essay I wrote for the course in a few days.

Dracula is one of those books that everyone has heard of. Everyone is familiar with the character of the Count, and most people have probably heard of Van Helsing and Mina at the least. But, in my case, although I knew the general outline of the story I hadn’t read the book since I was a teenager, so it was interesting to read the vampire book. 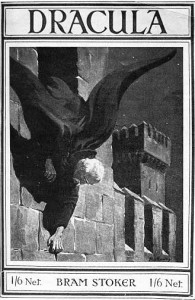 I was really entertained by the start. Jonathan Harker’s diary was excellent, full of tension and ever growing fear. You really got a sense of Harker being totally isolated from everything that might have provided comfort to him. From anything he knew. And being out of his comfort zone and then suddenly being confronted with nightmares come alive.

Unfortunately after that the book got a bit bogged down in a sort of “this happened and then that happened” and it suffered because of when it was written and set. All the male protagonists were so noble and well, jolly well decent, that it was a bit boring. The women too were almost too perfect. All the characters seemed almost stock characters, examples of what Stoker thought people should be, rather than accurate portrayals of what they are.

I still enjoyed my read of Dracula, and I think there is plenty of interest for anyone to discuss. The whole vampire myth building that he created, or adapted was game changing. And it is sort of amazing that our idea of what a vampire is still harkens back a huge amount to his creation. Plus it shows of Victorian Britain, with all its flaws and classist and racist leanings. Foreigners and lower class persons are just so beneath the middle class!

And do I even need to mention the vampire as sexual predator trope?

#MeFiFav "MeFi: "Symbolic of the nostalgia for a life I didn't know."" ift.tt/2Di22cm #MeFi

#MeFiFav "MeFi: 6m24s of something walking. A something that changes." ift.tt/306OHMD #MeFi