"I said no such thing," grumbled Lord Maccon, allowing himself, begrudgingly, to be trussed in a new evening jacket.
–Gail Carriger - Timeless - c. 2012 - pg. 1

An Alexia Tarabotti novel, The Parasol Protectorate: Book the Fifth

Seeing as this it the fifth, and final, book in this series, knowing anything about the plot probably counts as spoilers for the previous books. So consider yourself warned.

It has been three years since the end of Heartless and in that time Lord and Lady Maccon haven’t had to deal with any murder attempts. Instead they are learning to cope with parenthood, as well as the werewolf pack’s move to London of course. And all the fashion threatens to become too much for Conall. 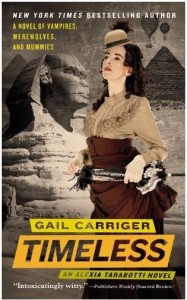 But then Lady Kingair, alpha of Conall’s old pack and his great great something or other daughter arrives looking for help regarding her missing beta. Dubh travelled to Egypt to investigate the god-breaker plague, but since then he has failed to check back in. With impeccable timing, her turns up in London, just in time to bump into Alexia and then get shot. Dead before he managed to reveal whatever it was he discovered.

A really do enjoy these books.

They aren’t all perfect or anything, and I do have a few issues with some bits, but at the same time I really don’t care. They are fun and entertaining and oh so very readable. Alexia is a great heroine. And her and Conall make for a great couple. And thankfully toddler Prudence didn’t get to much on-page screen. Babies and toddlers, especially when unique and precocious, can ruin a book with their constant burblings on matters of state. Prudence does feature, but she, is, for the most part, a toddler. Carried around and causing trouble. All the more than your average baby, if she touches a supernatural being she turns them mortal and becomes that being. Poor old Conall causes a little wolf-cub to appear on more than one occasion simply by trying to do fatherly things.

And okay, maybe everything was tied up just a little too neatly in the end, but, again, I don’t really care. I enjoyed these books and will be checking out Carriger’s next series of books featuring an older Prudence. Sounds like fun.

Other reviews: Books for life ; The review diaries ;