I’m a sucker for an animal story, especially a dog story, so although I thought this would be a fairly fluffy book about US military dogs I decided to give this a go. Written to tie in with the publicity army dogs received following their role in the attack that resulted in the death of Osama Bin Laden. 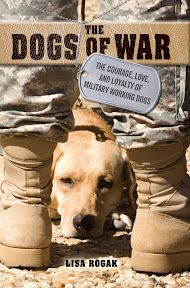 The dogs of war by Lisa Rogak

And it was better than I had expected. Rogak tells the history of the dog in war, brief mentions of the Roman legions war dogs, but mainly concentrating on the military history in the United States. Understandable as that is the market for this book.

Personally I enjoyed the anecdotal stories more than the history parts of it. Rogak skirts around the less savoury aspects of the dogs’ lives. She mentions that after the Vietnam war the military abandoned most of its dogs as they were seen as equipment which would have costed more to repatriate than they were worth. But she doesn’t speculate about their fate, which I’m guessing wasn’t the happiest.

This isn’t a book for everyone, but it does have some interesting stories and asides. If you’re a dog lover, like I am, you’ll probably enjoy it.

If you have reviewed this book leave me a note and I’ll link to your site.