I really enjoyed the first book in this series, The Strain worked really well as a competent vampire story. It was creepy and horrible and very readable. The second book, The Fall, I didn’t enjoy quite so much, but I still liked it. Solid, but still very readable. But this one, I dunno, I just felt bored for a lot of it. It felt like Del Toro & Hogan had come up with this great spectacle of an idea, of the world being overrun by a vampire, but never got around to figuring out how to end the story, and so when this, the final, book was being written they just had to throw something down on the page.

This is book three in the trilogy so if you read on you’ll probably read spoilers for the first two books. Nothing specific mind, just general state of play stuff. 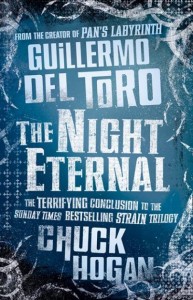 The Night Eternal opens two years after the events in The Fall, and as you may have guessed from that title the world has fallen under the control of The Master and his vampire strain. Here and there a few human fight back, but for the most part people have been subdued. Some go about their lives, an underclass in a world of vamps. Other live in camps where they are bred and bled. Cattle to feed the vampires.

Dr. Goodweather is still out there fighting, as are Nora, Fet, Gus, and others. But they are almost without hope. The whole world is under The Master’s control. What can they possibly do?

I never really felt that the characters in these books were particularly engaging. But I was content to let the story do the work. Unfortunately in this book the story just isn’t enough and the characters are forced to try and carry the novel. And for me it just didn’t work. It was, in many places, boring. For a horror book that’s a mortal sin! How can a book with vampires running around be boring? Well, when you just don’t care it turns out that it doesn’t matter how horrible the vampires are.

I also didn’t like the religious aspect to this. After all the almost scientific reasons for vampires in the first two books the origin story given here annoyed me. It also seemed like an easy out for an ending. I didn’t like it.

A pity because the first book promised a lot more.