Mel is not having a good year at school. Her friends have turned on her, and her boyfriend one day stopped talking to her, became her ex over night and hasn’t spoken to her in weeks. But she does have Pug.

I don’t think I am going to say very much in this review. But just in case you don’t read any further can I just say quickly that I really really really loved this book. 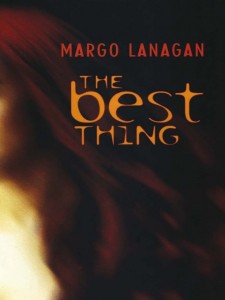 This is one of those books that might be labelled “domestic fiction”, because it is about those small everyday things that happen in life. And Lanagan writes it so well that you’ll be wondering why more books aren’t like this. Highlighting the small things in life because they really are the most important things.

Mel is such a great character. At times I just wanted to shake her because she was being so silly. And yet, it made sense in her convoluted way of thinking. Nothing she said or did ever made me think a real person wouldn’t do/say that. It all seemed so real.

And I loved her relationship with her parents. Not that it was perfect, or even functional at all time, it was just so realistic and believable. And that is what I want in my books, real characters who mess up, who make mistakes, and who are sometimes, just plain stupid in their actions.

I could maybe argue that Mel should have been a bit more worried about money, and her future. I know I was thinking about that as I read the book. What was she going to do if she dropped out of high school. Was she going to get a job? But that was never really brought up, which is understandable in one way. And she is still a kid in many many ways.

And then there is Pug. He was just wonderful. He’s the nice guy who never seems to get to play the love interest in books/films any more. He was solid and dependable and just nice and lovely. And you could so see why Mel fell in love with him. I mean, in comparison to the likes of Edward in the Twilight series, well, there is no comparison. Edward is a stalker, and I really don’t understand why Bella falls in love with him. But Pug… ah, just read the book. You’ll find him adorable, I almost guarantee it!

Okay, I’ve never wanted kids. Never had any interest in becoming a mother. So when I tell you that reading this at one point I actually thought, hmmm having a baby sounds pretty cool will tell you just how well written this book is. Not that I thought that for long, I mean, nope. Still not interested :) But it is a perfect illustration of what good fiction does, it gives you an alternate viewpoint from your own.

Other reviews: Joh Blogs ; We read ;