It is the era of silent films and George Valentin is a star. Crowds greet his films with delight and applause. While playing nice with the press he bumps into a fan, literally. She drops her autograph book and when she bends over to collect it they bump into each other. Valentin plays it up, and she joins in, to the delight of the press. The next day she is all over the cover of Variety with Valentin and a headline that reads “Who’s that girl”. Valentin’s wife is not impressed. But Peppy Miller, the fan turned extra & aspiring actress is delighted. And while working as an extra she ends up in a scene dancing with Valentin. Afterwards she sneaks into his dressing room, and is caught. But instead of getting angry with her Valentin gives her some help. Telling her that if she wants to be an actress she should have something the others don’t. So saying he draws a beauty spot on her face.

But things are about to take a turn for the worse for George. Talkies have arrived on the scene; he wants nothing to do with them and finances his own epic silent film. It is a failure, and then comes the economic depression, and poor old George is turfed out of his home, alone but for his faithful companion, onscreen as well as off, the dog, and his chauffeur/friend, Clifton.

I really wasn’t sure what to expect when I decided to go see The Artist, I knew it was black and white, but I didn’t realise that it was a silent film until it started. And I had no idea what the plot was about, I had just heard that it was getting some good reviews, and it was on at the right time. 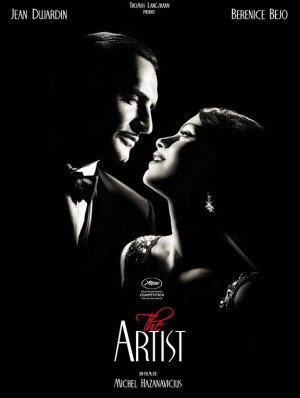 And it is great. I really really enjoyed it. I wasn’t too sure at first, Valentin is over-involved movie-star, proud, full of himself, and dismissive of others. Peppy is over the top, plays it up far too much for the camera and hammy. But the film does have an ace card up its sleeve. The dog. A little jack russell who steals the show, and does a lot to make Valentin more likeable, because he loves his dog, and his dog loves him. And we all know that that means he can’t be all bad.

I really did like this film. It was very moving, despite its lack of dialogue, and despite being quite light-hearted most of the time, and I really liked the way it was shot. It was just beautiful.