I cannot believe I’ve never reviewed Rocky before, but then again it is one of those films I’ve seen so many times, and before blogging was ever a thing, so in a way it makes sense.

I’ve never hidden the fact that I love this film; it is a classic. The sequels1 are not even half as good, but my opinion of them has improved over time. Not because they actually are good films, but because they do actually add to the development of Rocky as a character. They show him changing and adapting, but at heart he remains that same old character from the first film. And he is a wonderfully appealing character. Sure he’s tough and a fighter, but there is something so vulnerable about him that you worry for him. And once a film makes you worry for a character then they’ve got you2 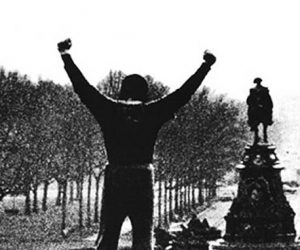 Rocky is so isolated at the start of the film. He has no-one; apart from Paulie and the mobster he collects money for. And can you call either of them friends? I guess at least Gazzo looks out for Rocky, in a way, but it isn’t a proper friendship. And Paulie! he is so lost in his own troubles that he isn’t a real friend, not someone you could depend on or even really talk to. Rocky doesn’t know where he fits in the world, doens’t know where he is going, and is alone, trying to make a connection with Adrian and ending up with “exotic pets”.

It’s strange watching his relationship with Adrian develop, that scene in his apartment always makes me tense. Because put yourself in Adrian’s shoes; this is a man who doesn’t give up, who wants something from her, who is large and threatening and not letting her leave. He holds the door closed on her remember. But at the same time Adrian herself is so damaged, emotionally, that she needs that bit of pressure to force her to act in any way.

I am not saying that she needs to be forced into a relationship, or that Rocky would be right to keep on pressing until she just gave in, but is you watch that first kiss scene you can see that he actually does give her space to stop, and then waits until Adrian kisses him back. It is uncomfortable because in other situations, with other characters that could be a terrible scene. But it just works here because although he does apply some pressure Rocky also knows just when to back off, to let her decide what happens next.

And as the films progresses you can see just how Adrian comes out of her shell more and more, the damage done by her mother and her brother is slowly being undone, and she is beginning to see her own value now.

It’s such a great film because it focuses on characters and little moments.

I totally love it, and am so looking forward to Creed 2 next month.