I don’t think I would have picked this book up at all if it hadn’t been nominated for a Hugo this year. The trilogy The Divine Cities is nominated in the Best Series category, and I am attempting to read at least one book in each series before voting.1

I am so glad that this is a nominated book and that I picked it up because I really liked it.

It is set in Bulikov, the main city in The Continent, a land ruled over by Saypur. One The Continent was called The Holy Land and was inhabited by gods who produced miracles and enabled their people to rule the world. Once they ruled over and enslaved the people of Saypur. But eventually one man discovered how to kill a god, and now Saypur rules, and Bulikov and all the people of The Continent must follow its directions.

In to this city comes Shara Thivani, or at least that is the name she is using at the outset, to investigate the murder. Professor Dr. Efrem Pangyui was looking into the history of The Continent and its Divinities. Something that every Continental is forbidden from doing. So when his body is discovered there are a number of possible reasons behind his death. But Shara is about to uncover a bigger secret than anyone could possibly have imagined. 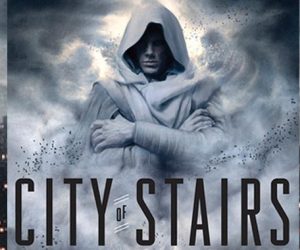 I found this a fascinating read. It’s a spy story, and murder mystery. It is an urban fantasy and yet feels epic in some ways. It has rulers and oppressed, colonisers and colonised, a history of violence and repression that colours everything and everyone. And no body is innocent.2

I really found the dynamics between the Saypuri and the Continentals to be really fascinating. Both can claim to be victims. Both can point to the other as tyrants and colonisers. Yes, the Saypuri are in charge now, but look to their history and you will see hundreds of years of enslavement. Now they see themselves as the civilised people, the others as backward and incapable of ruling themselves, but centuries of opression don’t just disappear from te national psyche. The Saypuri are both colonisers and yet feel some measure of insecurity and doubt when they look at their past.

The Continentals are almost the reverse. They, as a people, did terrible, awful things when in power. And their power was that of the Gods! almost unlimited power and they used it to enslave other people. To conquer nations and increase their own wealth. Now they may be at the other end of the power continuum, but many of them hark back to those days, many of them feel that they are still the chosen people and the Saypuri are less than human.

So yeah, as a person from a once colonised country that whole deal is fascinating to me.

Also I loved Shari as a character, so conflicted and at one cynical and yet innocent as well.

I was however, a bit disappointed that the books falls into the Show Spoiler ▼

Kill your gays trope. And there is only one queer character in the book, which makes it worse. I guess maybe Vo’s fiancee was also queer, she certainly knew that Vo was gay and it was hinted that maybe it was a convenient relationship for both of them, but that is just something I’m speculating about, I don’t think it was there in the narrative. So one gay character, who suffers because he is gay and then dies. It fits the pattern. I wish is didn’t, and maybe in the other books this issue is addressed further? We’ll see.

So a bit let down by that, but overall I thought this was a very strong book, full of great characters and interesting, original world-building. Who doesn’t love a vaguely Soviet fantasy Empire ruled by weird and wonderful gods? Yeah, okay, the rest of the world, because they’ve enslaved them all, but you know, it is a great concept.