Temur’s family are at war. His cousin and his brother have battled over who will get to be the next Khan. There is death all around him. Temur only survived the battle because he was so gravely wounded others probably thought him dead already and didn’t waste energy killing a dead man. But he survived.

Samarkar, the other main protagonist, is also from a royal family. She was once heir to the Rasan Empire, at least until a brother came along. Now she has renounced that role, and her fertility, and begun training as a wizard.

But both their lands and people now face the same outside threat, there are rumours that the fabled Carrion King has returned to reclaim his empire. 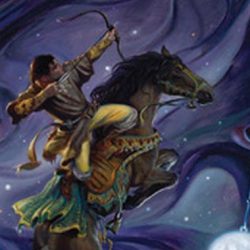 I really liked this book. It is good proper epic fantasy, with awesome world-building and a slow reveal of who the antagonist may be. It is not be set in the traditional “european medieval” fantasy ‘verse, instead this is an Asian/Russian ‘verse, Mongol inspired. Which of course made me think of the Jaran books1 but it is a very different book than those. Much more fantasy then science fiction.

But it investigates many of the same issues, gender roles and expectations, culture clashes, empire building and destruction, relationships. It also has a feature that I’ve come to really really appreciate whenever I come across it. Mature women. Not that there is anything wrong with young women and teenage girls, but it is so rare to find a woman over 30 with a prominent role in fantasy fiction. So it is great to see older women make their mark in books like this. Although, to be honest I’m not sure how old Samarkar is meant to be, she was married off and then returned to her family home, and is now a wizard, so I know she isn’t a teenager, but maybe she isn’t quite as old as I picture her. Maybe in her twenties rather than thirties?

Range of Ghosts is a book that in some ways follows the usual fantasy fiction paths. A hero on a quest, helped out along the way by various wizards and warriors, traveling onwards in his attempt to claim his throne, facing peril both marital and magical. Temus certainly faces all that, but Bear uses the reader’s familiarity with fantasy stereotypes and twists them enough to make them new and different. I really enjoyed this book. And it really helps that the characters are so solid and well drawn.

I’ll certainly be reading the next book in the series.