Book 1 in The Worldbreaker Saga

Before I even mention the plot of the book I want to just say that I love this cover. Go on, take a proper look : 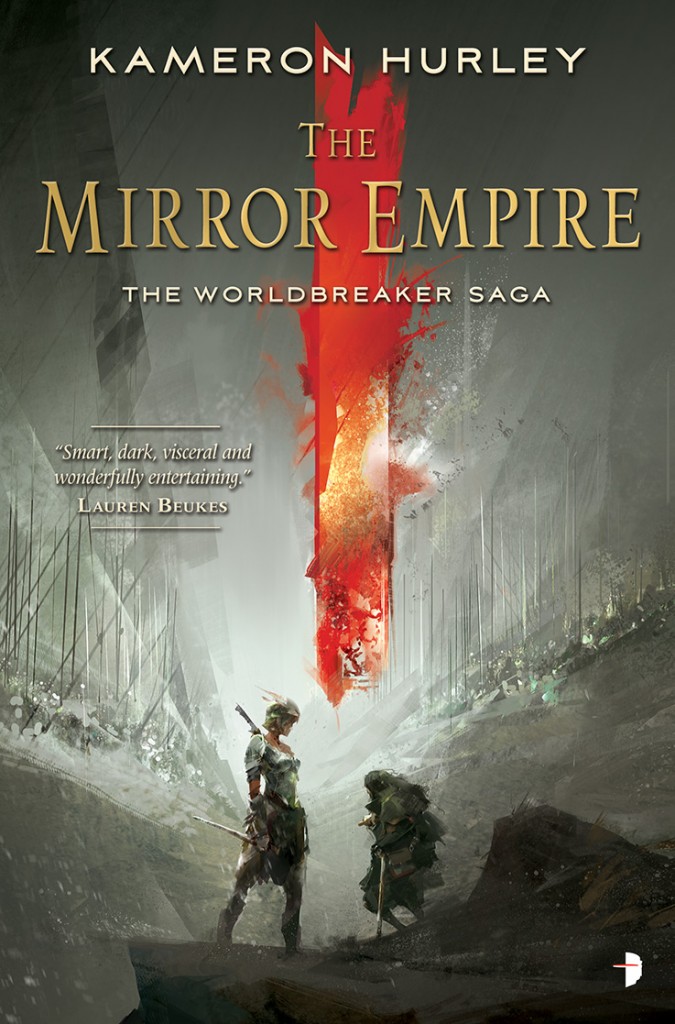 The artwork is by Richard Anderson and it just so beautiful and yet grim and dark at the same time. I love it.

But never judge a book by its cover, right?

The Mirror Empire has three main strands but I’m going to steal the blurb because I think my recap would make it sound so much more complicated on account of this detail and that detail and oh, you should know this : On the eve of a recurring catastrophic event known to extinguish nations and reshape continents, a troubled orphan evades death and slavery to uncover her own bloody past… while a world goes to war with itself.
In the frozen kingdom of Saiduan, invaders from another realm are decimating whole cities, leaving behind nothing but ash and ruin. As the dark star of the cataclysm rises, an illegitimate ruler is tasked with holding together a country fractured by civil war, a precocious young fighter is asked to betray his family and a half-Dhai general must choose between the eradication of her father’s people or loyalty to her alien Empress.

The only thing I’ll add to that is blood magic, oh, and walking trees. And the use of bears and dogs instead of horses. And before I add to many other details that are cool and awesome I’ll stop there and tell you what I thought rather than whats in the book. Because obviously you are going to go and read it yourself, and so I don’t need to reveal all the cool.

I will say that it took me a little while to get totally into this book, but I blame that on my reading style at the moment, for some reason I don’t seem to be reading in big chunks, it is much more likely to be ten minutes here and there, much harder to get immersed in a world when that is the case, but after a couple of chapters The Mirror Empire managed to suck me in. I was also a little confuddled at times trying to figure out who was who and where they were, but again, that’s more because of how I was reading than any problems with the writing.

There is so much great stuff in this book that there is no way I can mention it all, I mean this is already longer than most of my reviews and I haven’t said anything yet! First off, do you like complex characters? If so this is the book for you, because while they all believe in what they are doing, some of them would certainly be the villain in the black hat if this was by a different author. And there deeds are never just excused because the reader is in their story, they do bad bad things, and yes they are the bad guys, but then they also do good things too, does that make them the good guys as well? No, it just means that they are doing what they think needs to be done1.

Then we have matriarchal societies in various forms, and how that impacts on gender roles and expectations.

You know those books that change gender roles around but don’t actually do anything with it, its just like “look women as soldiers” or whatever, well this book isn’t that. Gender roles and expectations are not is the norm here in the real world, but they still aren’t perfect and it still leads to problems and prejudice and oppression. But switching things around in this way gets the reader to really see what is happening there.

I also loved the Dhai notion of not touching without consent. Not even putting your hand on someone’s knee without knowing that that was okay.

And the lack of issue they all have with whether you’re a woman having sex with another woman or a man, or vice vearsa, or married to two women and a man, or three men. Awesome.

And there is so many other things I probably should be writing about here, I’ll wait till the book comes out in August/September2 read loads of reviews and then reread the book and see if I can articulate more of what I loved about this book.

Read the prologue : Tor.com : Preorder The Mirror Empire on Angry Robot : Reviewed elsewhere : In case of survival, if you’ve reviewed it let me know and I’ll add a link.