The life and legend of the world’s most famous dog

While serving during World War I serviceman Lee Duncan came across a little of new born German Shepherd puppies. He took two for himself and gave the others to other soldiers. The two he kept he named Nannette and Rintintin. Unfortunately the little female Nannette died, but Rintintin grew up to be a star. 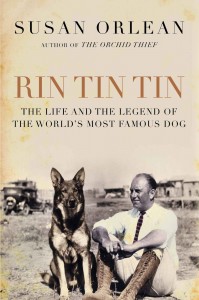 Orlean’s traces Rin Tin Tin’s development from his first roles as a stand-in for a wolf in motion pictures to his staring role in blockbuster films, and then his decline in popularity as the years go by.

Of course the film star of Rin Tin Tin was not just one dog. Or at least, not for long. At first Rinty was the star and did his own stunts and everything. Later he had stand-ins, and different dogs would play different versions of Rin Tin Tin, from playful to ferocious. And after the death of Rin Tin Tin a variety of his descendants took on his mantel, and even other dogs pretending to be Rinty while the “real” Rin Tin Tin descendant stayed at home playing the role of ranch dog.

But it is more than simply a look at a dog family. It is, rather, an examination of the role these German shepherds played in the lives of the men and women they touched. Duncan seems to have focused all his attentions and passions on the dog and promoting Rinty as a premier example of dogness.

She looks at how society changed over the years of Rin Tin Tin’s popularity and what he seemed to have represented to Americans, and other people whereever his films and later his television show played. But it isn’t a sociological examination either. Instead it is an examination of an obsession. Duncan’s obsession with his dog. America’s obsession with this canine hero. And all the others since then who have devoted their lives to keeping the memory of Rin Tin Tin alive.

I’m not so sure his memory is alive any longer, not over here anyway, I’d say very few children today would recognise the name, although I might be wrong.

All in all I found this a fairly entertaining book. I don’t think I’d be rushing out to buy it, or recommending that many people read it though. Solid would be an apt description, and that isn’t really a ringing endorsement, is it?