Thanks to Andi’s review of The Song of Achilles I learned that Miller had a new short story out. So off I popped to by it.

Based on the Greek myth of Pygmalion, a sculptor who carved a woman that the goddess Venus brought to life. In the myth they fall in love and marry. In Miller’s version they also marry, but this is not a love story. Galatea is more beautiful than any woman. Pure and obedient. Or at least that is what her creator wishes her to be. But Galatea does not remain a blank slate.

When the book opens she is locked away in a hospital under the watchful eye of the nurses and doctors. Supposedly she is there to recover, but she knows the truth, she is to be kept captive there. Locked up and kept ready for when her husband visits. The sole purpose of his visits is for sex, for which Galatea is required to re-enact her coming to life. 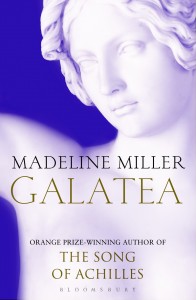 While I’ve heard of the myth I’m not hugely familiar with it. I’m more familiar with Shaw’s Pygmalion and the film based on it, My fair lady. Those interpretations of the myth do not have the same overtones as this short story though.

It is a short short. Very short, easily read in one session. But for such a short story Miller gets a lot across. Galatea is a real person, you can really feel for her and all she has gone through with her husband. Interestingly I don’t think he is ever given a name in Miller’s story, whereas in the actual myth it was Galatea was unnamed. She was usually refered to as “Pygmalion’s statue brought to life” or some such. Only in the 1700s was she christened with Galatea.

The one quibble I have with the story is that it seems very modern, and yet old fashioned. Galatea and her daughter seem to have modern notions of independence and education etc while her husband is still obsessed with obedience and purity, and above all with control. So I am guessing that the story is set in Anceint Greece, it just never really evoked that time to me.

If you’ve read it let me know what you thought.