IMDB description: From the bitter quest of the Queen of Longtrellis, to two mysterious sisters who provoke the passion of a king, to the King of Highhills obsessed with a giant Flea, these tales are inspired by the fairytales by Giambattista Basile.
IMDB rating: 6.5

Giambattista Basile was an Italian poet, he lived in the 1600s and he also collected and wrote fairy tales. Think an Italian version of the Brother Grimm. This film collects and adapts some of those fairy or folk tales. But this is not a film for children. It is more concerned with the dark aspect of those stories. Think about the originals, they aren’t innocent stories meant for nothing but entertainment. They contain warnings and horror. And this film certainly brings out the more horrific aspects of some of them.

And I still can’t make up my mind about it.

On the one had it is visually stunning and just beautiful. And I love fairy tales and their various adaptations are intriguing. But I was left with a bit of an unfinished feel.

This makes sense, when you look at the source material1 and many fairy tales have that sort of wtf! this makes no sense quality to them. And in written format I usually don’t have a problem with that. Maybe it was that I expect the fractured story that I got and so it took me too long to really get in the groove with this film?

But despite that flaw I really did enjoy huge parts of this story. Okay, so certain aspects weren’t developed or fleshed out, they simply were, and I would have liked a bit more reasoning. But I think if I rewatch this I’ll know what to expect and that won’t bother me at all.

If you have an interest in fairy tales, or the surreal and weird, then I would really recommend you take a chance on this film. It is just so different from so much of what gets made. Although based on a book it is certainly an original film.

Although it is certainly not for young children. There is violence and death and rape2 and it just wouldn’t be appreciated. 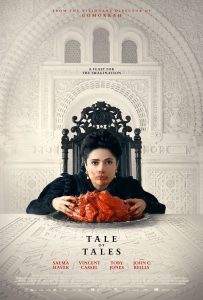 A feast for the imagination

Tags: based on bookfairy talesfolktalesIl racconto dei raccontiTale of Tales