This little kitten was wandering on the road; her eyes sealed shut and unable to see. So we picked her up and called into the house that it looked like she came from. And she probably did, two other adult cats hanging around and loads of cat food containers lying around. But no person. And considering the state of her eyes we thought it best to bring her in to the vets.

Luckily enough her eyes had’t ruptured from the infection.

No, I hadn’t considered that either until the vet mentioned the possibility as she squeezed pus out of her eyes. 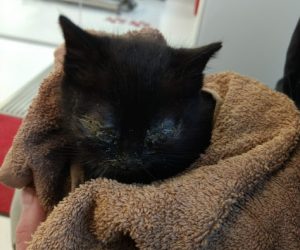 She’s still not out of the woods, the infection could move to her respiratory system and that might be the end of her, but for now little Shuri1 is doing well. Eyedrops & antibiotics and plenty of food and warmth and hopefully she’ll pull though.

The other two cats are not impressed. Hobbs “the cat” Johnson especially is not a fan of this little creature that has invaded his home. He won’t stay in the same room as her and runs off whenever she’s around.

As for the dogs, well Ripley can be trusted with her under supervision. She just wants to play with her. Unfortunately Bodie considers her a toy, and I know how dog toys end up so he has to stay away until she’s bigger and better able to take care of herself.

And a final reminder, if you have a cat, or know somebody with a cat, please get them neutered or spayed. One cat can lead to hundreds very very quickly.