A book in the The Universe of Xuya

I do love the idea of ships as people. I really enjoyed Anne McCaffrey’s The Ship Who series way back in the way off times when I read it. It’s just a fascinating idea, a space ship with all the computing power of an AI, but still a person, grown in a womb and birthed, part of a family and yet long lived. Imagine being that ship and having other people inside you! Or being one of those people, and walking around inside the ship that is another being’s body.

I just love the whole idea. 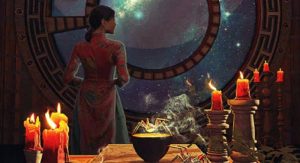 The team master and the detective

So when I knew this was going to feature a mindship I knew I’d be reading it. And then it was revealed that it was a Sherlock Holmes inspired story, with Watson played by the mindship… Awesome! Completely sold on the premise of that.

And the book didn’t disappoint in the slightest. I loved it all, I loved Long Chau as the Holmes-esque character, but the real star of the book for me is The Shadow’s Child, the mindship Watson. Suffering from PTSD and struggling to make a living, she becomes entangled with Long Chau, reluctantly at first but as they both grow to know more about each other a definite understanding develops.

The only problem is that it is a novella, so it ends far too quickly! I want to learn more about the characters and ‘verse they inhabit. I know, there other Xuya stories out there, and I’ve read some and will read more, but I’d love a big fat book starring these two characters in particular.