This film is so awesome. I loved it.

I mean, I’d heard good things before I went, although I did try to ignore most of it because pre-hype doesn’t work for me. I’d watched the trailer, but not too many times, just to whet my appetite. And I had enjoyed T’Chella’s part in Civil War, so I had high hope for this. Plus Ryan Coogler will forever be one of my favourite directors because of Creed. So you could say I was looking forward to this film.

But honestly, I had no idea how much I was going to enjoy Black Panther. 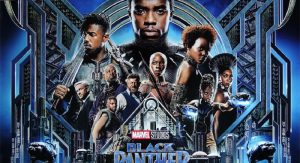 First off it just looks wonderful. The scenery, the special effects, the costumes, all wonderful. Such a difference from most of the other MCU shows1 which tend towards the greyness in their backgrounds.

And the actors! So great.

Some I’d seen before, like Daniel Kaluuya in Get Out2, of course Michael B Jordan from Creed, Lupita Nyong’o from Twelve Years a Slave, and although I didn’t realise it until after the film General Okoye was played by Danai Gurira from The Walking Dead3. They were all great, although I have to admit I think my favourite characters were M’Baku played by Winston Duke and Shuri played by Letitia Wright4 . M’Baku had a fairly small part, but he was just great and so entertainingly charismatic. Shuri could so easily have been the annoying kid sister, but while she did play that a little she was engaging and entertaining and obviously knew what she was talking about.

The one thing I wasn’t sold on was just how quickly certain events took place, Show Spoiler ▼

that quickly Wakanda change their entire way of doing things on the say so of someone who thinks killing his enemies children is a-ok?

and also the final battle, lets just say I have concerns over Show Spoiler ▼

how quickly that all escalated, and the Wakandans turned on each other

And that is without mentioning my dislike of monarchies. Because that is no basis for power. And then you throw in ritual combat to prove your kingship… that’s not my idea of a good system of governance5

Overall I loved it. Kickass action. Wonderful to see so many actors and characters of colour on screen, and in a film that allowed them to be characters, not just stereotypes and background filler. It also addressed a lot of political issues in a very overt way, but never in a preachy way, always as part of the film and the characters motivation. I mean, you couldn’t really object too much to Killmonger’s anger could you? He is fairly justified in that.

The other things that I loved and adored about this film was that it showed women as real people and characters. Not just a Smurfette, but in a variety of roles, with a variety of views and actions. And they talked! among themselves! It passed the Bechdel-Wallace test so easily and so quickly.

Seriously, if you haven’t been to see this yet go see it. You’ll love it.