I can’t remember where I first say mention of The only harmless great thing, and I never noted it down on Mount TBR, so I’m guessing it was sometime during that six month period of incredible internet-woes. I think I read a short story of hers, and then heard about this and pre-orderered it, but I can’t be 100% sure. I do know that I’ve been looking forward to it for a while. 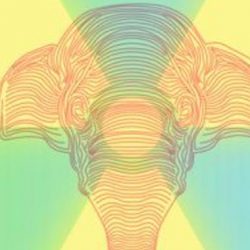 Because it is a book about sentient elephants mixed in with the story of the radium girls, back when glowing watch dials were all the fashion these were the women who painted the numbers on, wetting their brushes by licking them, and poisoning themselves with radiation in the process.

Their story is one that deserves to be told and I know there are a few none fiction books on the subject out there, but at least in this reimagining of their tale we get some semblance of revenge.

Its a wonderful novella. Full of emotion and atmosphere.

It is told through different narrators in different times, which is fitting, given that watches play such a prominent role. Time and memory are at the heart of this book. One of the characters worries that all this history will be nothing more than a footnote in history books… humanity does terrible things time and again and we forget about them, or wave them away saying wasn’t that terrible, but it is in the past. Well, it might be in the past but that doesn’t mean that we should ignore how horrific events were, or excuse people their actions. It is important to be reminded of the bad just as much as the good, more so in some cases.

The only harmless great thing reminds us that it wasn’t so long ago that big business was taking advantage of poverty and ignorance in order to make itself even richer, and that people were more than willing to be entertained by animal cruelty. Well, that’s all still around and maybe we need to be reminded of that fact as well.

But, this is a story, so in order for the message to work it has to be told well. The story and the characters have to be believable and gripping. In this novella they certainly work, and their story is what matters most, not that message, or at least the story drives the message rather than the other way around. It is beautifully written and so worth a read.