I requested this from the library because I came across it on @Justaddbooks’ twitter feed and it looked interesting. I think that I should have read the full blurb before I started the book though, because I thought it was about the ancient Irish ways. And it is, but, well I’ll copy & paste the final sentence from the blur for you Old Ways, Old Secrets shows us how to uncover the wisdom of the past, as fresh as it is ancient.. 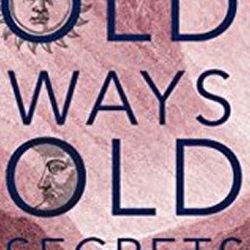 Yeah, so I’m not really into that whole new-paganism. I don’t believe in the Christian god, I’m sure not about to believe that the fairies are coming to get me because I broke the branch off a thorn tree.

I’m really really lacking in belief in all these sorts of things. I don’t believe people have “the cure”1 I don’t believe in The Good People stealing away babies, or that raths should be left undisturbed because bad things will happen. For someone who reads and loves fantasy/folklore/mythological stories I really don’t believe in anything unless I have proof.

All of which means that I am not the target audience for this book.

I am also somewhat familiar with a lot of Irish myths, legends, folktales etc. I love reading them. So a lot of what was mentioned here was already familiar to me, and the author doesn’t go in to a whole lot of depth. The book felt quite superficial. Although I guess it is a popular new-age introduction to pagan Ireland rather than anything else.

It also suffers from that strange nostalgia that says the old ways are best and things were better modern technology and sure weren’t people back then only great. I’m sorry, but you are looking at them with rose-tinted glasses. Modern life is great for most people in Ireland. Yes we may have struggles but in general the standard of living is so far above anything anyone could even have imagined a hundred years ago, let alone one thousand. The author also states at one point that there is little evidence that the druids in Ireland practiced animal sacrifice… I’m pretty sure that the kingship rite of mating with and then killing and eating a white mare is animal sacrifice. I know the bestiality part may have been made up, but I’m pretty sure that the killing of the white mare is fairly widely reported. And then you have the bog bodies and the probability that they were human sacrifices.

People in the past were just that, people. As terrible as people are today, and as wonderful as people are today. Their understanding of the world was certainly different to ours and so their reasonings are not always understandable by us, but they were certainly not wondrous folk who knew all the secrets that we today have lost.

Also superstition is just that, superstition. It is not something to be held up as great and fantastic that a farmer won’t plough a field, or a road must be moved in order to avoid ill luck from the fairies, that’s just crazy. The same sort of crazy that says the pine marten kills babies by sucking the blood out of their bodies. Folk wisdom often does contain kernels of wisdom and truth, but that doesn’t mean you need to go believing in the whole shebang and giving up on rational thought.