Pretty much everyone is familiar with Wonder Woman, right? Diana Princess of Themyscira, amazon and superhero. Well, count me as one of those who is familiar with the name, but I know nothing really about the mythology surrounding the character. I watched, and loved, the recent film. It was awesome. And I know I watched some of the old tv episodes, but that is the extent of my knowledge. But if you are in the same boat then this is the book for you. Because this is a brand new origin story for Diana. Here she is a teenager, out to prove herself as worthy of her place among her amazon sisters and mother, constantly having to face the fact that she never earned her life on Themyscira and wondering does she really deserve her life?

And into the mix comes Alia Keralis, bringing discord and destruction with her, for Alia is a Warbringer. A descendant of Helen of Troy, and having inherited her warbringer blood, her presence is enough to cause people to bicker and fights to break out, and if Alia lives to be seventeen then she will usher in an age of warfare and horror.

But maybe Diana can help Alia prevent this from happening, although in doing so she will be breaking the laws of Themyscira, risking exile at least, and possible death. 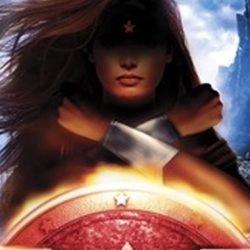 I wasn’t too sure about this book when I first started reading it. Having it set in the modern day threw me a little, maybe I was expecting it to fit in with the film timeline… Also, I’m not to sure about Diana’s relationship with the other amazons, especially her mother. Part of me understands why the relationship here is a distant one, but it did feel the same as the film, and I loved the Amazon society of the film. Still, those are issues I brought to the book, not problems inherent in the story itself.

Once I got into the story though they no longer bothered me and I was able to enjoy the story of Diana finding out just what a hero she is, and whether or not she is really worthy of being called an Amazon. It is a coming of age story for her in a way, or at least, of her finding her feet.

I’ve never read any of Bardugo’s other works, but she seems to be quite popular, and they look like the sort of book I’d be interested in reading, so maybe I’ll find the time to investigate them. Warbringer is a solid read, entertaining and enjoyable, but it isn’t one that’d make me want to devour all by the author. However I have read that her own books are very different, and it cannot be easy to take a character like Diana and remake her anew.