I’m not quite sure when I first watched Monty Python and the Holy Grail, but I know I wasn’t too young. Certainly a teenager. I’d heard of Monty Python but was more familiar with John Cleese from Fawlty Towers. I think I bought a collected dvd set, although maybe I caught some on the television… I’m not quite sure. Whenever it was, I loved it. I still love it. 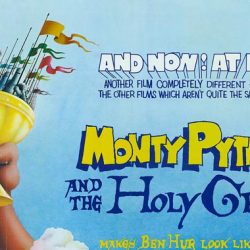 It is just brilliant. This, along with Life of Brian is my favourite of the Python films. It has a plot as well as jokes, it works as a story not just a series of comedy sketches. And it is almost too quotable. The French taunters, the members of the anarcho-syndicalist commune being repressed. Just plain awesome.

I don’t think I will ever not find this funny. Like other great comedies1 the more you watch them the more enjoyable they become.