The grass was white with frost on the shadowed sides of the reservation hills and ditches, but the morning air was almost warm, sweetened by a southern wind.
–Louise Erdrich - The last report on the miracles at Little No Horse - c.2001

For years now Father Damien has been writing to the pope. He is looking for answers, for hope, for guidance. So when, at long last, Father Jude arrives one day Damien thinks his letters have been answered.

Eighty years earlier Sister Cecilia left the convent and became Agnes. Music, especially playing the piano, distracted her from her religion. Or maybe her musical passion distracted the other nuns. 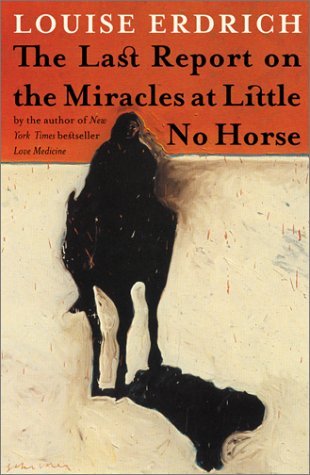 The book is about Father Damien, about Agnes, about the times they lived through and the people they knew. Especially the Ojibwe residents of Little No Horse, a reservation that Damien helps to convert in the 1910s, although maybe he is really converted by them. Father Jude is investigating whether or not Sister Leopolda has performed miracles, hence the title, Damien is a sceptic. He knows too much about Leopolda to credit that claim. But how much can he reveal to Jude, much of his information came from the confessional, and then there is the fact that Leopolda knows that Damien is actually Agnes.1

So what is the book all about?
Well, what is life all about. Because I suppose the book is about life and living. Truth and concealment. Does the fact that Father Damien is not quite who he says he is undo all his good works? Does the good outweigh the lie? And in Leopolda’s case does her passion excuse her zeal?

It is a wonderful book, told in alternating time lines, from the 1990s back to the beginning of the century and then catching up on what happened in between. It is the story of the reservation and how so much of it was stolen by colonialism and that is an important loss. It is also the story of how gender matters, even when you think it doesn’t. At one point Father Damien is talking with another priest, who knows the truth, and Damien feels that this other priest constantly talks down to him. Not on purpose, he just takes control without even realising it. Damien wonders is that because he is treating her like he does other women. Or is it because he knows she is living a lie? And, of course, then Damien wonders does he treat other women in the same manner now that he has taken on the role of a man?

The last report on the miracles at Little No Horse is almost a conversation rather than a story, but it a great conversation, one that you really want to be part of, even if there are no real answers given to the multitude of questions raised.

And now that I have discovered that many of Erdrich’s books have overlapping characters and aspects of stories I really must read more from her.

#MeFiFav "MeFi: "Tell your friends that the Vikings are gay"" ift.tt/3f3H1Qv #MeFi