It is the first day of November and so, today, someone will die.
–Maggie Stiefvater - The Scorpio Races - c.2011

Near the village of Thisby on the island of Skarmouth lives Puck Connolly her two brothers. Her parents were killed a few years back, they went out on the boat fishing and the capaill uisce got them. And what, you may ask are the capaill usice, well, if you translate it you get water horses. And if you know you celtic mythology you might know of the the terrifying water horses that lure people to their deaths. Well, these share a name. And they are terrifying, but although those myths gave the author her inspiration they aren’t really all that similar. The capaill usice of The Scorpio Races look, at a glance, like horses, but they are carnivores, and they love their meat.

They live in the ocean, but every year, in November the storms drive them to the shore. Some of the men will venture out and try to catch the capaill and master them enough that they can be ridden in the annual Scorpio Races. 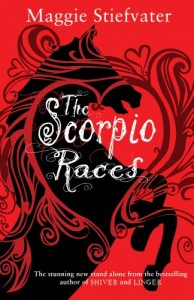 I’ll admit that when I first saw mention of this book I wasn’t too sure But I’ve read quite a few favourable mentions of it, and I stored the name away. And then, last month we did a book-buy at work. And among the stock we bought was a copy of The Scorpio Races so I thought, oh, I’ll read that, and nabbed it. A few days later I finished a book on the train and was flicking through my kindle when I spotted the title. I’d bought it myself. Doh! But I’m glad I had, because it meant I started reading it. And I loved it. Of course, I’m biased on account of horsies! okay, not real horses, but still close enough.

It starts slow, and develops gradually, but it is the better story for that. We really get to know the two main characters. Both are teenagers living without parents, both are fighting hard to survive and to get what they need. And there is no stupid love triangle, which I am so very thankful for, because that is such a cliché at this point. Puck, or Kate, is fighting to keep living in her family home. Her older brother wants to leave the island, she cannot imagine that. She loves the island, even with it “small-town” problems and rain and dreariness and the dangers the capaill uisce bring.

Sean trains the capaill usice, as well as normal race-horses. He has been involved in the Scorpio Races ever since he was child, he saw his father killed by one, but still he loves his red stallion Corr. Corr might attack and kill him, but Sean knows him, knows how he’ll react and how to manage him. But Corr is not his, he belongs to the stable owner and nothing Sean offers is enough to buy him.

This is a wonderful story, with wonderful characters and so well written I may just have to try some more by the author. I’ve been avoiding them because the covers and blurb seem so clichéd young adult romance at the moment. But you know what they say about never judging a book by its cover…

thoughts on my reread, less of a review more of a rambling series of thoughts:
I still loved it. It is a perfect book for the RIP challenge, because the race happens on the 1st of November so all the build up is pure autumn, albeit an autumn on a windswept island where there isn’t much mention of Halloween. But what do the islanders need with make believe monsters when they have their capail uisce? and their own unique history. But throughout the book there is that wonderful atmosphere of winter drawing near. Long dark nights and short cold rainy days. It seems like a very Irish place, but what the mainland actually is is never mentioned in the book. It could be Ireland, but I’d guess that it is Britain, and that Thisby is a Scottish island, the Hebrides maybe or Shetlands, somewhere like that. The exact details aren’t important, it is the sense of this place that is important. Thisby is unique in having the capaill usice but it faces a lot of the same problems that other, real island populations face; poor economy, losing the young people to the mainland, trying to hold on to its own identity in the face of tourism and a tourist’s idea of what island life is or should be. But of course the horses are what make Thisby.

And Thisby is just as important as any character in the book. It is first and foremost the setting, the physical space where all these people and horses live and race, it is the only place in the world the capaill usice come to shore. It is magical and unique and wonderful. But it is also dangerous and treacherous. It is, after all, the only place the capaill usice come to shore. Thisby is the natural world. Full of terror and wonder all at the same time. But it is also home. And full of comforts. And yet suffocating depending on who you are. But doesn’t everything that is important have that duality to it. If it was all sweetness and light could you respect it? If it was all teeth and destruction could you trust it? Corr, the red capall usice that Sean Kendrick rides, is the embodiment of that duality. He could kill you. But he is beautiful. You shouldn’t trust him, but you can’t help falling in love with him. He is what he is, and to understand him you have to realise that he is dangerous. He, and all the other capaill usice force the riders into at least attempting to understand them. Sean may be the only one on the island who truly does understand them, but to ride them at all you must make some effort, if only out of a sense of self preservation.

And while at first glance Puck may seem more easy to understand, more straight-forward she isn’t. She has two names you know, Kate, her given name. And Puck, her nickname. If that doesn’t hit you over the head with duality I don’t know what will! And she is wonderful. If I had read this book as a teenager I think it would have been read to death many many times. first of all, yes, it has wonderful horses and wonderful not-quite-horses, but also it has Puck Connolly. The only girl in her family, growing up with two brothers, one older one younger. The middle child, and then when her parents are killed by a capall uisce she is forced into becoming more of a mother than a sister. She turns into the one who cooks and cleans while Gabe the older brother tries to support them financially. And it isn’t that she resents that role, maybe a little, she knows it needs to be done. But a huge part of her wants something else. Freedom. And while she never comes out and says “I’m a feminist” because I don’t think she would think about it in those words that is a huge part of who she is and what her battle is. Thisby is a place where old traditions and customs are still alive. And part of that life is that men often view the women in their lives as mysterious and other. Which of course is not what women are. Women are people, just as men are people, and what Puck wants is to be treated as a person. Not as a “woman”. She doesn’t want to be a man, she is a girl on the cusp of becoming a woman, and she doesn’t want to change that, she just wants to be treated with respect.2 .

I could go on and on about this book, but I have to stop at some point so I may as well stop here.

Header image is still from The Scorpio Races by Maggie Stiefvater video – http://www.openfilm.com/videos/the-scorpio-races-by-maggie-stiefvater