Lillie Sterling and her husband John are travelling to Java. A second honeymoon says Lillie, while for John it is all about the business. Even aboard ship he is constantly interrupted by urgent telegraphs and paperwork. He seems to take very little interest in his wife.

Then Lillie encounters a man whipping his servant in the ship’s corridor. She is horrified and tries to avoid that man from then on. He, however, does not want to be avoided. Carefully he cultivates a relationship with John Sterling and persuades him to come stay at his mansion while he is doing business. And he sets about seducing Lillie. 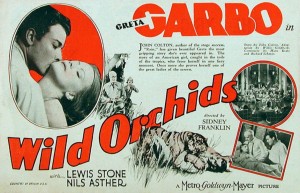 I don’t think this is a film I would usually have picked up, but I wanted to do some sort of film-related course on coursera and Marriage and the Movies started at the right time, so I figured what the hell, lets see what happens.

This is the first assigned film, but while I’m supposed to be looking at the marriage aspect of it I really couldn’t ignore the racist and orientalist nature of the film. First off, the seducer is a Prince of Java. Although he looks nothing like all the other inhabitants, instead he looks like a white man wearing eye-liner. And all the dialogue1 about how the east is an exotic place where “orchids grow wild” and women are more natural. Yeah, that’s pretty much your classic exotic other right there.

But does the modern viewer excuse that given the time it was made? I don’t know, I don’t think I can excuse it, but I can try to acknowledge that it is problematic while still appreciating the rest of the film.

Back to the marriage aspect. As Jeanine Basinger says in her lectures, the state of marriage is often seen as the end result, it is the happy every after so that in most marriage movies something had to occur to upset the marriage. In Wild Orchids the audience can see from the outset that Lillie is feeling somewhat ignored. John pays a lot of attention to money and business. The implication is there that she is a pretty trophy wife, she is younger than him, but possibly doesn’t mean a huge amount to him. She seems to care for him, she even reveals the Prince’s advances to John. Unfortunately her husband had dropped off to sleep in the middle of their conversation.

The upset in the marriage is the attempted seduction, and what it means to both Lillie and John. It is someone showing an interest in Lillie, which is what she is looking for. And the Prince is an exotic and wildly wealthy individual who is concentrating a lot of attention in trying to obtain Lillie. John, until he realises the situation is in Java for business. A wife is merely an unwanted distraction.

Of course in the end John declares his love for Lillie. And displays that love in his willingness to murder the Prince. Murder by tiger! it’s not an obvious one :) And she has always loved him so they end back together again. Both saying “I do” to their marriage and ending the film on a happy note.

I don’t watch a whole lot of silent films. None in fact2 , although I have seen the odd clips, so it was interesting for me to watch this one. One thing that surprised me was how undramatic the acting was. Most of the clips we see now are from those melodramas, woman tied to the train-line and the like, so you sort of get this hand-waving, moustache-twirling view of silent films. I will admit, there was a little of that. You have to make your actions bigger when you can’t give voice to what exactly is going on. But it was exaggeration rather than overly dramatic, and I was quite entertained by the film as a whole. I don’t think it will convert me to watching random old silent films, but it certainly wouldn’t put me off them either.