I totally agree with that old saying “never judge a book by its cover”, but more often than not it is the cover that piques your interest. If it didn’t all books would look the same surely? Cover art is an important part of a book. It is the major thing I miss when buying ebooks. And the cover of Wolves is certainly an attention grabbing one. I first spotted it on Carl’s January Covers post and although I knew nothing about the book I picked it up when I spotted it in the library. 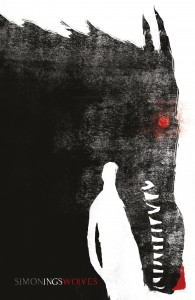 Wolves by Simon Ing (click through for a larger version)

It is a fantastic cover.

But while the cover might prompt you to pick up a book it is the story itself that is the really important thing. Otherwise I’d just buy cool looking postcards1 . I knew nothing about the story before I started reading, I hadn’t even glanced at the blurb apart from knowing that it was about augmented reality and set in the near future. So I’m not sure how much I should reveal.

Conrad narrates the story. It begins when an old friend contacts him after Conrad has been in an accident and his girlfriend has been seriously injured. Michael and he used to be best friends, but life happened and they drifted apart. The story often relives moments from Conrad’s past, when he and Michael used to go to school together. There are a couple of incidents revealed through the novel that offer an insight into why Conrad is the way he is. Because, to be honest, at the start of the novel I found him to be a dick. And he certainly has his dickish moments, and some of those actions are unforgivable, in my opinion, but he has issues. With a capital I S S U E S. It isn’t an excuse, but it made me somewhat more of a relate-able character. The problem is it comes out through the course of the story and I was tempted to give up before those incidents were revealed.

Luckily for me I didn’t give up on the book, because by the end is a hugely rewarding novel. It isn’t a sci-fi novel in the hard sense. It is set in the near future and the technological advances are only beginning, as are the problems that might, or might not, end up in The Fall of society, as Michael fears. But the science plays a hugely important part in the story, which is the story of Conrad growing up and becoming an adult, as well as solving the mysteries of his past. So you could describe this book as a coming of age novel, even though our protagonist is no teenager at the start of the book.

It is a huge pity that the start is so slow, but I don’t know how it could have been changed, because it all pays off so well in the end. But I can’t rate it any higher than an 82 even though the final third of the book was very much unput-downable. It is also a book that I think would really reward a reread. Hopefully at some stage I’ll get a chance to revisit Conrad and Michael and their world.

Other reviews : Nerd Life You ; Fantasy book review : Worlds Without End entry let me know if you’ve reviewed it and I’ll add a link.