Clarance, the ninth Earl of Emsworth is enjoying life. The pride of his life, Empress of Blandings is in good health and life at the castle is peaceful at calm. He does have an unwelcome guest, but Mr. Howard Chesney can easily be avoided by hiding out and taking dinner on a tray in the library. But life will not remain peaceful for long. Visitors are coming. Some, such as Galahad are welcome. Others, such as Constance and the Duke of Dunstable are certainly not welcome. Galahad, the pelican of the title because he is a member of the Pelican Club, is Clarence’s brother. And always full of good advice. Constance, one of the Earl’s sisters is the reason for the Duke’s visit. She hopes he will marry Ms Vanessa Polk.

Also visiting is Wilbur Trout, an American. Vanessa was once engaged to him and still has a soft spot for him, he is just out of one of his innumerable marriages. Wilbur wants the portrait of a reclining nude that Dunstable recently purchased. Of course, Dunstable only bought it because he knew Wilbur wanted it and now thinks he can make a tidy profit on selling it on. Dunstable is bringing his niece, and she is the reason for Galahad’s visit, because his godson John was ever so briefly engaged to her, and wants to still be engaged to her. She is not amiable to this idea at the moment, but Galahad is convinced he can persuade her otherwise. 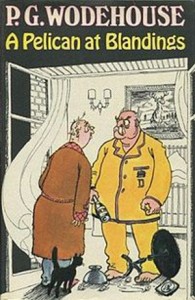 A Pelican at Blandings by P G Wodehouse

Wodehouse certainly has a pattern in his novels doesn’t he? Romantic interests and misunderstandings. Intricate plots and imposters. Inept aristocrats and capable butlers.

Of course the fact that these elements show up in so many of Wodehouse’s books doesn’t make any of them any less readable and less enjoyable. Jeeves and Wooster are probably the most famous of Wodehouse’s creations, but the inhabitants of Blandings Castle come a close second.

If you’ve never read a Wodehouse I don’t really think this is one to start with. It’s still good, but it isn’t a great as some of the earlier ones. There are few things as good as an early Wodehouse book.