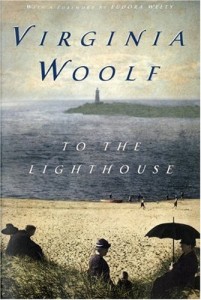 Much of this novel revolves around the one afternoon and evening before this proposed trip to the lighthouse. The Ramsay family, maternal and magnificent mother, needy professor father and all eight children are staying in their holiday home in the Isle of Skye. With them are a number of other guests, Lily Briscoe the painter. William Banks, Augustus Carmichael, and Charles Tansey.

In the final section of the book the remaining members of the family return to their holiday home, and some travel to the lighthouse.

It doesn’t sound very interesting, does it? But this is about much more than a family trip. That is the view from the outside, but we also get the internal desires, needs, and thoughts. It takes one afternoon and uses that to examine family relationships, politics, the way society at the time was changing. The role of women, the very idea of what it was to be a woman. All this is examined and explored.

I should have really liked this book. The writing is fantastic, the way Woolf gets across the thoughts and emotions of her characters. James’s rage, for example, at his father interupting his storytime with his mother and his constant refusal to humour anyone. Mr Ramsay must always respond with the absolute truth. I can well imagine that many many children have experienced that moment of hatred, whether at their parents or another child, it is captured and expressed wonderfully.

But as a whole it just didn’t work for me. I think if I had read it in one or two sessions it would have, but I read the opening few chapters at the start of one week, and the rest at the end of the next. That took me too far out of the book, I think I’ll try and reread at some point because there is just so much going on here. It does require you to pay attention though, a lot of it is stream-of-consciousness so on occasion sentences can run on and on, but it is worth it.