Most people are probably somewhat familiar with Franz Kafka. When we hear that something is Kafkaesque we think of the surreal and the absurd, but with a darkness. The Metamorphosis is possibly his most well known story. The tale of a travelling salesman who wakes one morning and finds that he is a giant beetle or cockroach. How many of us know the rough outline without ever having read the actual work? 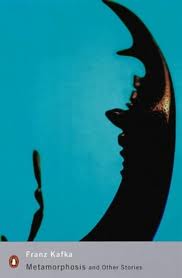 I do have a vague memory of reading it at some point in the past. But years and years ago. I know I didn’t appreciate it then. Reading it now I was left with an overwhelming sense of sadness. Gregor is a pitiable person even before he is transformed into vermin. His family are even worse. For a while the reader may hold out some hope for his sister, but that never comes to pass.

Why and how Gregor became an insect is never discussed, never explained. That is not the point of the book, it isn’t even vaguely important to the characters. What is important is how it changes Gregor’s relationship with his family. Up until his transformation he had been the sole bread-winner, he can no longer support even himself. He has become a burden on the rest of the Samsa’s, but his thoughts and memories seem to suggest that even while he was supporting them his parents never truly valued him.

This, supposedly, is a worry that Kafka himself had, that he was disgusting and a drain on his family. In some ways it seems like a analogy of someone suffering from depression, but it could also be about modern life and the alienation of capitalism and the city, or even about ageing. There are many many interpretations, and all, I would think, valid in their own way.

I’m off to watch my coursera lectures on the story.