Jane Eyre’s parents die when she is an infant, and she is taken in by her uncle. Her uncle also dies, after obtaining a promise from his wife that she will care for Jane. So Mrs Reed is forced into looking after this unwanted child. And she punishes her for it. She never shows love towards Jane, never shows care. Instead all the Reed family bully Jane. Her every misdeed is punished while those of her cousins are ignored, and often blamed on Jane. But escape comes for Jane, she is sent to a “charitable” school. Things don’t start out too well there, but she gains her education and in time becomes a teacher, and then, finally deciding it is time to set out for herself, she advertises as a governess. A job that will lead her to Mr Rochester. 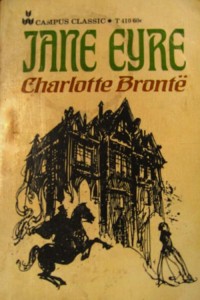 I’m guessing that for many people that introductory paragraph was not needed. Jane Eyre is one of those classic books that almost everyone in the western world is aware of, and if they aren’t they know there is a film or a television programme of the same name.

I’m not sure when I first read Jane’s story. I know I studied it at college where our lecturer went on and on about Rochester having to be rendered impotent in for Jane to be able to marry him. I didn’t really like that lecturer. On this reread, for a purely voluntary online course I enjoyed Jane’s autobiography a lot more.

I enjoyed the story, the tale of an orphan alone in the world who, through her industry courage and intelligence, finds her way to success in the world. And I also really enjoyed all the analysis and discussion on the course as well. I had been aware of the colonial interpretation and the feminist one, but I had never really thought of Bertha as Jane’s method of revenge. I like to think of her as Jane’s Hulk character :) Everytime Jane gets hurt, there is Bertha to inflict some damage on the wrong-doers, author intent or no.

If you’ve never read Jane Eyre I would highly recommend that you give it a go. It’s available for free on gutenberg you know.