Dock's shoes on the rocks up the hill and his heavy breathing had shut out all sound so that it seemed a long while she had heard nothing, and Amos lay too still, not clawing at the blanket as when they had started.
–Harriette Arnow - The Dollmaker - c. 1954 (1972) - pg.7

I originally read this book in October of 2010, my original review is below but I have a few additional thoughts after my reread. 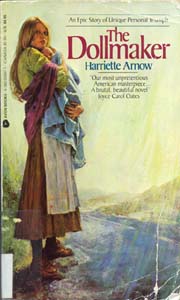 It is still a hugely powerful and effective read, I reread it because I suggested it for a new book club I’ve joined and thought I should refresh my memory. I’m not sure it was a great choice for the club, it is quite hard to find here in in Ireland and the second hand copies people have been buying has quite small print. Plus it is a big long book. But it is a great book club read because of its contents, imo anyway, we will see when we meet up at the end of the month.

I adore the character of Gertie Nevels. She is just a wonderful person, and yet at the same time she isn’t idealised or held up as some shining example. She is a person who makes the best out of what she got, and what she got is not a lot.

Gertie is, as Arnow described her, a woman trying to get by. She struggles to survive and it is precisely this struggle to survive that makes this such a great read. Rereading it I knew that her happiest moment was when she was on the cusp of owning that little farm, and that contentedness was to be snatched away from her, and her family, all through a misunderstanding and a lack of communication. And she leaves, she does what she thinks is the right thing, although she knows that she doesn’t want to, she knows she will not be happy in Detroit. Yet she goes, because her husband has work there. She goes without complaint. Arnow may not have liked to see The Dollmaker as a feminist work but I cannot describe it as anything but. It highlights perfectly the plight of women like Gertie in society. Of course it is also a book about prejudice, class, and the casual cruelty of the world. The police and undertakers that conspire together to make money out of “hard cases”! The stories told in passing of the terrible things done to girls out walking home, and occasionally to boys. The uncaring world. And yet Arnow contrasts that with the people of the housing project. They may not all get on, some may hate the others, but at the same time they come together when the chips are down. They commiserate with their Japanese neighbour when the atomic bomb is dropped. They mind each others children.

It is a great book and everyone should read it.

The world is at war, and the army is stealing away the men, and those that are left are being hauled off to work in the factories in order to assist the war effort. In rural Kentucky Gertie is lucky enough to still have her husband around, he drives the coal truck, but knows that this situation cannot last. He has his date with the army already lined up. But she is preparing as best she can. She has been saving her money and almost has enough to offer on a nearby farm. Without having to pay half what they earn on rent Gertie and her family will be able to plan for the future. But on the eve of her plans coming to fruition all is ruined and she must uproot her family and follow her husband to the city of Detroit. The Dollmaker by Harriette Arnow

Over at Books are Dangerous Pam mentioned that one of her favourite books was The Dollmaker by Harriette Arnow, so I decided to give it a go. She had warned that it was a sad book, but oh my god, the depression you feel while reading this one is unrelenting. And just when you think it might lift a little, bam, it hits harder than ever. But don’t let that put you off, it is a fantastic read. And I may even reread it at some point.

The entire story is told from the point of view of Gertie, everything we find out is because of what she sees or knows, although on one or two occasions there are a few sentences to give a broader viewpoint. But as for what is going on in the book, that is all from Gertie’s POV. And she starts off the novel such a strong character. She knows who she is and what she wants. She has a plan to improve her lot and the lot of her family, and she can see how to work that out. But we do get hints of her lack of self-confidence in other respects. Her mother’s belief in a religion of hellfire and damnation is different from her view of god. But while she rejects that wrathful god, she cannot reject her mother and her mother’s influence. And once she leaves the familiar setting and is dumped amid the chaos of Detroit she loses her way. Uncertain and powerless.

There are a lot of themes in this book, and I’m sure you could read a whole lot into the book, from a feminist reading, to a religious one. You could look at the corrupting influence of the city, or the freedom offered by artistic expression. And even how to raise children. Or the effect of unions on a family.

But this isn’t an academic blog and I’m not going to go into all that, apart from to say that is is amazing how much this book covers without even seeming to try. It is the story of one family and the mistakes they make, the tragedies they suffer, and the problems they face from not communicating properly. At one point in the book I really wanted to smack some of them and tell them to talk to one another. Stop keeping secrets and hiding things. Just talk!

And the ending… I’m still not sure how I feel about it. Show Spoiler ▼

Is the destruction of the Jesus carving a sign that Gertie and her family are now doomed to live forever in poverty. Clovis has no income, can the dolls they make really provide enough income to pay off their debts and escape the city? Or will it give them just enough to allow them to go back to Kentucky and rent a farm and try to start to save all over again. I’d like to take the second reading, but I’m just not sure.

I think I could talk about this book forever. Or at least for a long time. What I also found interesting is that Harriette Arnow didn’t think this was a feminist book:

And then more lately I discovered, though I haven’t been able to read the piece the woman wrote, that I was a feminist. I cannot believe that I am a feminist. I don’t think Gertie was a faminist. What was best for her children came first. On the other hand, I’m weary of this talk of women. It’s much like the old talk of the proletariat, that woman is woman, and there are no individuals, and all women are alike. It makes me both angry and sick at my stomach, because women are individuals and each should be permitted to follow her own bent, have control of her body. If a woman wants to marry and stay home and raise six children, that’s her business, and never with a thought beyond the home and the church and the school.

whereas to me that statement right there is a feminist statement. And I think that is one of the problems with feminism, how it is perceived. Some people seem to think that to be a feminist you must insist that all women join the workforce and earn their own money. I disagree. I think being a feminist simply means that men and women should be given equal opportunity. Ah, but that is a different conversation. I do think however that one quotation in particular from The Dollmaker stands out in relation to it being a feminist book, it comes in the second half, after the family have moved to Detroit and Gertie has an argument with her son’s teacher, which leads to an argument with him, and between him and Clovis, and between her and Clovis.

Slowly her hand dropped from the doorknob, and she turned back to Clovis. It wasn’t the way it had used to be back home when she had done her share, maybe more than her share of feeding and fending for the family. Then, with egg money, chicken money, a calf sold here, a pig sold there, she’d bought almost every bite of food they didn’t raise. Here everything, even to the kindling wood, came from Clovis.
She understood in one second of time so many things – the trapped look in Mrs. Anderson’s eyes, why Max’s radio played so loudly sometimes when she had an evening off and Victor was home. The rich had wide lawns and thick walls; the poor had radios.

I have said more than enough here, and yet, could say more, but I won’t, I’ll just urge you to read this book.

Other reviews: Be in red ; A literary odyssey