Book one of The Wheel of Time

In a quiet back water village strange things are stirring. It has been a hard winter, harder than any can recall, and spring is long overdue. What news there is from the world at large is dark and troublesome. Wars, winter, and a false Dragon. But the people of the Two Rivers are hardy folk, stubborn some say, they will continue on as they always have. Wars shouldn’t trouble them. 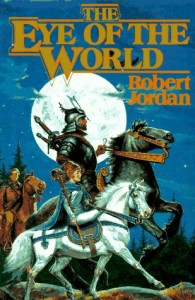 The eye of the world – Robert Jordan

But on Winternight all that is going to change.

It is pretty much impossible for my to give an objective review of The eye of the world. I first read it so many years ago when I was in second year in school, and since then I have reread it innumerable times. I think on my first reading there were another 3 books already published, it may have been only two, but I remember many many trips to Broderick’s book shop in Sligo who had promised that the next book would be in stock next week. Oh sorry, next week. No next week. But once I had caught up with Jordan’s output I had to reread, usually I’d do the whole series when a new book was due. And as the first in the series tEotW got more rereads than the later ones. Plus it was my introduction to Randland and all the goodness therein. So I’m giving it ten stars. If I came to it fresh today I’m not sure I would, but a book is more than just a story, it is every memory it brings with it too.

But if you are thinking of starting to read The Wheel of Time series, now that the final book is due in just a few short months, what should you expect? Well, if you’ve read The Lord of the Rings you will certainly spot many echoes. Some have called it a LotR knock-off, but I don’t agree with that at all, there are similar elements in this book. Three young innocents abroad, venturing into a danger much older and darker than they ever could have thought possible. With magic and evil creatures, Trollocs here in place of orcs, and evil black riders sniffing you out. But they are allusions rather than a copy. In WOT women actually feature quite heavily. As well as the three boys; Rand, Mat, and Perrin, two young women also leave the Two Rivers. And the whole party is led by a woman rather than a man.

In Randland you see it is women and not men who wield the One Power, or magic. The male half(Saidin) was tainted by the Dark One thousands of years ago. Any man who can wield saidin is doomed to go mad and die. Which means that there is a huge imbalance of power, gender-wise, in Randland as a whole. For many, the Aes Sadai, the women who can use saidar are distrusted and regarded as witches. In many countries they are are banned completly. In others they are welcomed. But in most they are tolerated but distrusted.

Many many people dislike the portrayal of women in The Wheel of Time series. I’m not going to comment on that yet, because I’m only talking about tEotW today, and I think that both men and women are treated quite fairly in this book. Yes, the main character is a male and so we get his opinion on most things and sometimes he does dismiss half the population with a “women!” but that is a character response, not necessarily the author’s opinion. And both men and women here act like people. Some good, some bad.

I could write loads more on WOT but I think this is enough for the moment. If you’ve enjoyed epic fantasy before and like to read long books then give this one a try. If you don’t like it you don’t have to read any further, if you do, well, you’ve loads more books to come!