Its 2044 and time travel hasn’t been invented yet. But in thirty years time it will be. And then promptly criminalised, which means of course that only the criminals use it, and mainly they use it to send people they want killed back in time. In the future there is no way of disposing a body, tracking and tags and whatnot, but for the “loopers” of 2046 it really isn’t such a big deal. A person comes back, hooded and in a straight-jacket. They murder him with a blunderpuss, burn the body, and go collect the money. And every once in a while the looper discovers that the body is his future self. It is an extra big pay day and an end to his doing hits for the mob. Plus the knowledge that in thirty years time he’ll be dead.

Gordon-Levitt plays Joe, the youngest looper. And he is about to complete his loop and meet his future self. 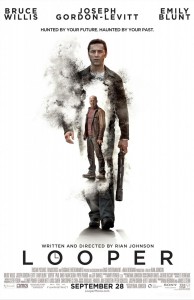 This isn’t the best film ever made. But it is a good solid bit of entertainment. The action is all well shot, the acting is great and overall it is worth watching.

I did have some issues with the time travel bit though. I know, they went all hand-wavery and tried to have Bruce-Joe explain it all as mights and possibilities, but that doesn’t really wash with me. I mean, the past is the past. Doesn’t matter that you’ve gone back in time, in your time-line all that stuff still happened 30 odd years ago. Show Spoiler ▼

and so while the leaving messages on people’s skin and then amputating bits was really cool and horribly creepy at the same time, it didn’t really work for me. Likewise, Bruce should have known what he did in his past, because he did it. But you know, that doesn’t make for a very interesting film, so I’ll give it a pass.

I also thought that Gordon-Levitt did a great job of playing a couple of Willis mannerisms without going all out and imitating him. The two Joes are very different characters. One is a young up and coming hit-man, out to have a good time and make some money. The other has lived a life and a half and come through the other side. He has something to fight for, something no one will take from him…

But again with the woman as motivation. honestly!

But once you don’t get too caught up in the whole time travel issues and the paradoxes that fill the screen you should enjoy this film. Like I said at the beginning of this post, it isn’t *the* film of the year, don’t buy into the hype, but it is a good film.