One minute it was Ohio winter, with doors closed, windows locked, the panes blind with frost, icicles fringing every roof, children skiing on slopes, housewives lumbering like great black bears in their furs along the icy streets.
–Ray Bradbury - The Martian Chronicles

First published in serial form in the 1950s The Martian Chronicles is a collection of short stories that together tell the story of humanity colonising Mars. Almost all the stories are entirely set on Mars, and deal with the effects that people have on the planet.

The story opens in January 1999 with the heat of the rockets melting away the winter weather and bringing a false summer to Ohio. We then meet up with our first Martian, Ylla. She is having strange dreams about a man, a man who looks unlike anything she has ever seen before. Her husband begins to get jealous, despite it being an almost loveless marriage and the fact that these are only dreams. 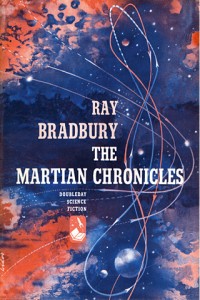 The Martian Chronicles by Ray Bradbury

From there the stories move on through the various expeditions to Mars. The colony that begins to form and the changes that happen.

It is a beautifully written book. Of that there is no doubt. And there are plenty of great ideas to be explored in it. Obviously colonisation is a huge theme in it, and there are obvious parallels with the US’ westward expansion. There is the nature of reality and hallucinations. What is real? Memory and nostalgia. There is censorship and control. And of course alienation.

Other reviews: The Mad Hatter ; Chamber 4 ; Resistance is futile