Book one in The Lion Hunters
Although this book doesn’t really have any fatastical elements, I am still counting it towards this year’s Once Upon a Time challenge because it is an Arthurian legend inspired book.

Medraut is the eldest son of Artos, but he will not inherit the High King’s title, lands, or power. For he is the illegitimate son of the king. And more than that, the result of incest. Medraut’s mother is Artos’ sister, Morgause. In this adaptation of the Arthurian legend Artos, or Arthur, has two more children. Twins, Lleu a son, and Geowin, a daughter. Much younger then Medraut, it is Lleu who will inherit everything. It is Lleu who receives all his father’s love while Medraut has to live under the cruelty and torture of Morgause. 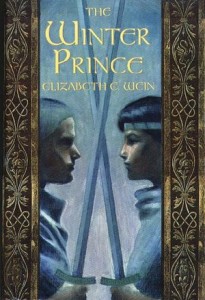 My main reason behind reading this was Wein’s most recent book, Code Name Verity which I loved. Unfortunately this series of books, The Lion Hunters seem to be out of print, so if you are interested in reading this you will have to look for some second-hand sellers. Although I did see mention of the possibility of some ebook publications in the future. Here is hoping, because while I didn’t love this one quite as much as Verity it is still a great read.

Told in the first person, by Medraut, and addressed to his mother, it took me a little while to get use to when he addressed her as you, but apart from that it was an engrossing read. Medraut is such a conflicted character, he often doesn’t know how he feels about his situation or his siblings, he has been so twisted by his years under Morgause. And there is a lot of darkness there, mostly hinted at, very little overt, but you still totally understand that Medraut has been badly damaged. And like many victims he is still very much under Morgause’s sway, he may hate her, but he will also obey her because he fears her. And he also does resent Lleu, afterall, the favoured son has everything that Medraut could possible want, and yet doesn’t seem to appreciate it. Lleu’s arrogance pushes at Medraut, provokes him, but is it enough to push Medraut over the edge?

This isn’t a book that everyone will enjoy, but I certainly appreciated its beauty, and will be reading on in the series.