Conrad Scalese’s latest opera was a great success. Unfortunately the theatre in which it was performed has just been stuck by lightening. And since the composer and many of the performers have fled Naples the church decides to blame him. As the librettist his words caused God’s wrath to strike down the building.

But, as the Inquisition come calling, King Ferdinand II has other plans for him. The King of the two Sicilies has heard reports that a secret society are planning to use the miracle of the Sung Mass, but in the form of an opera, and call forth the devil. These “Prince’s Men” believe that God has abandoned the earth, but that, given the chance, Lucifer can break free and do a much better job of ridding the world of pain. To do so their “black opera” and blood sacrifice will destroy all Naples, all Sicily, and possibly even all of Europe. 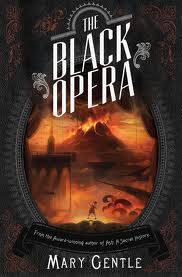 The black opera by Mary Gentle

I’ve been a fan of Mary Gentle’s work since I read Ash: a secret history many, many years ago. So when I spotted this I had to nab it. The premise sounded wonderful. And alternate world where the Sung Mass of the church can bring about miracles such as the dead returning to life sounds great. Plus, you know, devils and conspiracies. Betrayal and love. It should have been a great story.

Unfortunately from the first page it just didn’t grab me. Maybe it was too concerned with the world of opera and I don’t know enough about that. Or maybe it was because it was all about the power of music and that is hard to portray in a book. I’m not sure, but it just didn’t work for me.

I think it was actually a bit too sprawling. Maybe tighter editing would have made it a better read? For a book that deals with gender roles, raising the devil, zombies, miracles, religion, science and atheism, it just seemed like nothing all that major was happening. No tension I guess.

Don’t get me wrong, it wasn’t terrible, or bad. Just adequate. So damned with the faintest of faint praise…