In the silence of the shrine, I bowed to the corpse on the altar: a minor member of the Imperial Family, who had died in a boating accident on Lake Texcoco.
–Aliette de Bodard - Obsidian and Blood (Servant of the Underwold)

The Acatl stories : Servant of the Underworld, Harbinger of the Storm, and Master of the House of Darts.

Acatl, our narrator, is an Aztec priest. High priest to Mictlantecuhtli, the Mexica god of death and the underworld. He who welcomes us all in the end. Acatl never particularly wanted to be High priest, but here he is in the role. Watching the boundaries of the Fifth World and doing his best to keep the balance, all the while living in the knowledge that his parents died unhappy at his choice. Priesthood is not a real man’s job. Why couldn’t he have followed the example of his elder brother and become a warrior. 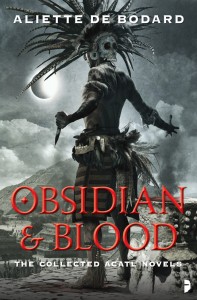 Just as well his parents are dead, for now Neutemoc, Acatl’s brother, has been arrested. He is under suspicion of having used magic and broken the boundaries between this world and the next to murder a priestess Eleuia. Acatl doesn’t believe he is guilty, but proving it may be more difficult.

And that is the plot of the first book in this trilogy about Acatl, and if I had to describe them in one word I would have to say original.

However, I am not limited to one word, so I will continue :) It is a blend of historical, fantasy, and whodunnit, all taking place in the world of the Mexica, or more usually the Aztec. I’m guessing that straight away that has brought images of human sacrifice to your mind, hasn’t it? And yes, there is some of that here, but it never overshadows the fact that there is a hell of a lot more to the Aztec, as a people and a culture.

As High Priest of Mictlantecuhtli, Acatl doesn’t sacrifice people, but he does sacrifice birds and other animals, as well as offer his own blood. Daily offerings to thank the Fifth Sun for rising, as well as to perform rituals and magics. I’d be lying if I didn’t wonder about blood poisoning and the like given how often he cuts open his earlobes, or drives thorns through them. But once you get over that fact, and the issue of the names, you’ll find a great story with a really different setting.

I really enjoyed it, ad will read more about Acatl, the world he lives in is intriguing. I can’t imagine having to worship such cruel and capricious gods as the Southern Hummingbird and his ilk, but it makes for great story-telling.