Book three in the Newsflesh trilogy

It is 2041. Three years have gone by since the first book in this series, and a lot has happened in this series. So much so that to say anything about the plot would really to give spoilers away. Well, apart from saying that there are zombies involved. And fear-mongering, and propaganda, and conspiracies. And death. Loads of fun!

Consider that your spoiler warning as well. 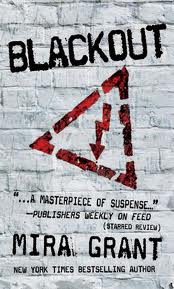 I really really liked the first book in this series. Book 2 was almost as good, and this is just as good as the second. Grant certainly knows how to write a great action story. But it isn’t just about killing zombies, it is more about the rights of governments to decide what is best for the people. And what happens when they take those “rights” too far. It could easily be seen as a story about terrorism and fear. Modern society if you like, only with zombies instead of terrorists. Or zombie terrorists.

The one thing I didn’t like was the romance aspect. It really wasn’t needed. And it was icky. I don’t care that George and Shaun were adopted, they were raised as brother and sister, and that makes it icky, but then again, they aren’t harming anyone else so who are we to judge there either.

But it didn’t seem to read that way in the first book. Overly close, yes. Codependent and odd. For sure. But romanticly involved. I didn’t read it that way. And to be honest, I liked the fact that a female protagonist didn’t have a love interest.

So, it is far from perfect. The clone thing was almost a cop out from killing off George I think. But at the same time it was interesting to read George 2’s thoughts on being George, but not being George. I mean, what is a person? Is cloning a sort of immortality, or are you killing your self off? What is the self at all? But overall I had a really good time reading it, and the whole series. Highly recommended.