aka Avengers Assemble, which is a totally crap name. Even Marvel’s the Avengers would’ve been better. Stupid marketing decisions are stupid. 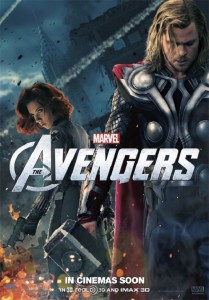 Okay, so long time readers of the blog here will know that I am a huge fan of Joss Whedon. Just take a look at the post before this one and you’ll know what I mean. But I very deliberatly was trying not to get excited about this film before it came out. It just seemed like it was too much. Too many superheroes crammed into the one film, how could it work? I knew that if anyone could, Joss could, he does great work with ensemble casts. But what about the studio influence? I decided months ago that I wasn’t going to anticipate this.

But how could I not?

It has been almost a week since I first saw this film[1] But I have seen it twice, 3D & 2D versions. And I can, quite confidently saw that it is awesome! If you haven’t seen it yet[2] well off you pop and take a peak.

It is just so much fun. Yes, there are a lot of superheroes, and not all of them get equal screen time, but they all get to do their bit, and none of them were slighted at all. It is a long film, two and half hours or thereabouts, but it doesn’t feel it at all. I enjoyed all the interaction between the heroes. Iron Man was his usual cocky-ass self. Thor was wonderfully Thor-ish. Nick Fury was all Samuel Jackson-esque and mighty :)

The story is a solidly entertaining one. I’m sure there are plenty of plot-holes that could be found, but I’m not about to go digging looking for them, they didn’t jump out at me while I was watching it, the dialogue and the characters kept me more than entertained. And the action scenes should please any fan of the genre. Plenty of action and fight scenes, and all of it totally watchable.

Before seeing the film I was a bit worried about Black Widow and Hawkeye, but I really enjoyed their storylines. Black Widow in particular I thought was great.I shall eagerly await the next Avengers installment.