Read for the Once Upon a Time VI challenge

Many, many moons ago Carl posted his review of this book. And then and there I thought, that sounds interesting. But I never got around to buying it at the time. I think it hadn’t been published by a UK/Ire publisher at the time. And the kindle version was likewise off-limits. But for some reason it popped back into my head a few weeks ago. And seeing as it was about the influence of books and reading on a person I figured that it would be a perfect book for a library. So I cheated, I bought it for work so I could read it for free. 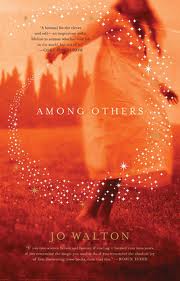 Among others by Jo Walton

And Carl was right. It is a wonderful book.

Told in diary form, it is the story of Mori who has through some accident lost her twin sister. She also has an injured leg that means she cannot run as she once loved to. She ran away from her mother and ended up with her father. She wanted to live with her grandmother, but social services dictated that her father was the best person to look after her. Despite the fact that she had never seen him, he left her mother a long time ago. She is sent off to boarding school, with English girls! English!

Away from her Welsh home, and the fairies that were such a part of her life.

But she still has her books and her reading. And slowly she introduces herself to the English fairies. Now, when I say fairies, that is what Mori calls them because when she was a young child that word seemed to fit. They don’t call themselves that. They certainly don’t call themselves elves, although Mori and her sister did name a few of them after Tolkien’s elves. As a matter of fact these fairies don’t call anything anything, they don’t use nouns at all.

Did I mention that this is a wonderful book? Because it really really is. And it would make for a brilliant book list too. Anyone interested in an Among Others book group to discuss the books that Mori mentions reading? It’d be great.

I loved the way Walton writes about books. About how they really can be so important to a person growing up. I always read as a teenager, even if I didn’t discover the wonders of Inter Library loans at such a such an age, and I would have loved to have a book group like the one Mori stumbles across. My reading was always a more solitary thing. Well, until the Wheel of time series came along and generated hours and hours of conversations.

I don’t know if I was entirely happy with the ending though. Which is why I haven’t given it ten stars, although I think that it may grow on me.